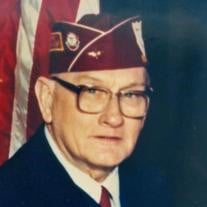 Mr. Wright S. Swanay, 91, of 407 Pine Hill Road, Elizabethton, died Saturday, September 17, 2011 in the James H. Quillen VA Medical Center, Mountain Home, following a brief illness. He was born in Vonore, TN to the late Robert Wright and Carrie Birchfiel Swanay. In addition to his parents, he was preceded in death by his wife, Bernice Nave Swanay (2008); three brothers: Joe Swanay, George Swanay and Henry “Butch” Swanay; one sister: Maggie Sue Hamm; and an infant sister, Ruth Swanay. He retired from Raytheon as a computer programmer and was a member of Immanuel Baptist Church. Mr. Swanay volunteered for military service in the U.S. Army Air Corps on July 3, 1942. He served as a bombardier and was shot down over Budapest, Hungary on his 39th mission on July 2, 1944. He was liberated from captivity in Moosburg by General George Patton’s army on April 29, 1945. He was awarded his Purple Heart for injuries he received while a POW. Mr. Swanay dedicated much of his post-war years to helping his fellow veterans. He was a volunteer service officer at the VA Hospital for many years. He was a former State Commander of the Tennessee Chapter of Ex-POWs and was currently serving as the Commander of the East Tennessee Ex-POW Chapter. Mr. Swanay is survived by two sons: Bill Swanay and Russ Swanay, both of Elizabethton; one grandson, Bob Swanay and his wife, Donna, Elizabethton; one granddaughter, Jo Ann Harris and her husband, Todd, Everett, WA; one great granddaughter, Susan Swanay, Elizabethton; a special niece, Carrie Beth Swanay, Johnson City; two other nieces: Sharon Parks and Carol Swanay, both of Alabama. The funeral service for Mr. Swanay will be conducted at 7:00 pm Monday, September 19, 2011 in the Sunset Chapel of Hathaway Percy Funeral and Cremation Services with Dr. Pat Sloan and Chaplain Wilford Manley officiating. The family will receive friends from 5:00 – 7:00 pm Monday prior to the funeral service in the chapel and at the residence at other times. A private graveside service will be held at Happy Valley Memorial Park with military honors to be accorded by the American Legion Post #49. Honorary pallbearers will be the members of the East Tennessee Ex-POW Chapter. Those who prefer memorials in lieu of flowers may make donations to the charity of their choice in memory of Mr. Swanay.

The family of Wright S. Swanay created this Life Tributes page to make it easy to share your memories.

Send flowers to the Swanay family.