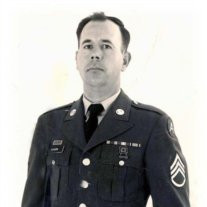 Windford Wilson Shook, 75, of Elizabethton, passed away on Saturday, September 28, 2013 in the James H. Quillen VA Medical Center Hospital, following an extended illness. Mr. Shook was born in Arvonia, Virginia to the late Alvin W. and Thelma M. Lawrence Shook. In addition to his parents, he was preceded in death by two brothers, Roy Shook and Donald Garland Shook; and one granddaughter, Hannah Deloach. Mr. Shook retired from the United States Army, where he worked as an Engineering Equipment Mechanic and achieved the rank of SFC, E7. He was a member of Eastside Baptist Church. Survivors include his wife, Mary Lee Smith Shook, of the home; two sons, Alvin Shook, Elizabethton and Kenny Shook, Greeneville, SC; two daughters, Janet Shook, Elizabethton and Bonnie Tunnell, Simpsonville, SC; seven grandchildren, Miranda Shook, Jesse Deloach, Kara Short, Lacey Soloman, Dakota Wilson Shook, Austin Hyder, and Evan Tunnell; four great grandchildren, Charlie Scalf, Joshua Feathers, Savannah Shook and Skyler Deloach; one brother, Harold Shook, Lexington, NC; four sisters, Lola Kuslansky, Largo, FL, Betty South, Boone, NC, Opal Williams, Vilas, NC, and Revonda Coffey, Lenoir, NC. Several nieces and nephews also survive. The funeral service for Mr. Shook will be conducted at 1:00 PM on Thursday, October 3, 2013 in the Sunset Chapel of Hathaway-Percy Funeral Home, Elizabethton with Rev. Jeremy Rhoton, officiating. The family will receive friends from 11:00 AM – 1:00 PM in the funeral home chapel, prior to the service on Thursday or at the residence at anytime. The graveside and interment will be conducted at 2:30 PM on Thursday, October 3, 2013 in the Mountain Home National Cemetery in Johnson City. Military honors will be accorded by the Carter County Honor Guard. Active pallbearers will be military personnel. Honorary pallbearers will be J.D. Coffey and Sam & Mabel Rogers. Those who prefer memorials in lieu of flowers, may make donations to the James H. Quillen VA Medical Center Hospital / Homeless Veterans Fund, 99 Sidney Street, Mountain Home, TN 37684. “For I am the least of the apostles, that I am not meant to be called an apostle, because I persecuted the church of God. But by the grace of God I am what I am: and his grace which was bestowed upon me was not in vain; but I labored more abundantly than they all: yet not I, but the grace of God which was with me. Therefore whether it were I or they, so we preach, and so ye believed.”

The family of Windford Wilson Shook created this Life Tributes page to make it easy to share your memories.

Windford Wilson Shook, 75, of Elizabethton, passed away on Saturday,...

Send flowers to the Shook family.