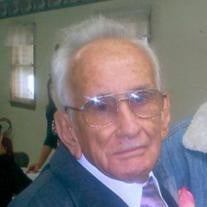 Willie A. Barnett, age 85, of 114 River Road, Elizabethton, passed away peacefully with his family by his side on Saturday, January 12, 2013 in the Sycamore Shoals Hospital following an extended illness. Mr. Barnett was a son of the late Frank and Pearl Barnett. He was of the Pentecostal faith. Willie was a very loving and devoted husband, father, and grandfather. In addition to his parents, Mr. Barnett was preceded in death by his son, Willie Barnett, Jr., a sister, Edna Simerly, and a brother, Doran Barnett. He is survived by his wife of 64 years, Opal Barnett, of the home; eight daughters, Barbara Maye and husband, William, Unicoi, Brenda Stout, Erwin, Beverly Barnett, Johnson City, Benita Bucher and husband, David, Elizabethton, Bertie Hodge and husband, Rocky, Hampton, Betsy DeLaVeta and husband, Victor, Elizabethton, Bridgett Peeks, Elizabethton, and Becky Gardner and husband, Bart, Jonesborough; fourteen grandchildren; seven great-grandchildren; a brother, Carmack Barnett and wife, Judy, Johnson City; and a sister, Gloria Jenkins, Elizabethton. Several nieces and nephews also survive. The funeral service for Willie A. Barnett will be conducted at 2:00 P.M. Tuesday, January 15, 2013 in the Sunset Chapel of Hathaway-Percy Funeral and Cremation Services with Pastor Hobart Bradshaw and Pastor George Hall officiating. The family will receive friends in the funeral home chapel from 1:00 to 2:00 P.M. on Tuesday prior to the service or at the residence other times. The graveside service will follow immediately on Tuesday in the Happy Valley Memorial Park. Active pallbearers will be his grandchildren. Those wishing to attend the graveside will travel together in procession to the cemetery. The family would like to extend a very special thanks to Dr. Walter and the 3rd floor staff of Sycamore Shoals Hospital for the wonderful care given to Willie during his illness.

Willie A. Barnett, age 85, of 114 River Road, Elizabethton, passed away peacefully with his family by his side on Saturday, January 12, 2013 in the Sycamore Shoals Hospital following an extended illness. Mr. Barnett was a son of the late Frank... View Obituary & Service Information

The family of Willie A. Barnett created this Life Tributes page to make it easy to share your memories.

Send flowers to the Barnett family.