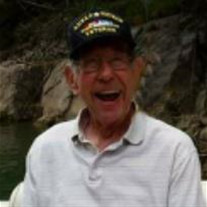 Mr. Ward Fender, age 84, a loving father and grandfather of Unicoi, TN passed away unexpectedly Wednesday, December 27, 2017 in the Johnson City Medical Center following a brief illness. A native of Burnsville, NC he was the son of the late Levi and Ila Cooper Fender. He retired as a butcher with Ingles Groceries. He was a U.S. Navy veteran for thirty years having served in the Korean War and three tours in the Vietnam War. He was a member of the Fleet Reserve. He enjoyed camping and fishing on his boat, traveling and spending time with his family and friends at the campground. In addition to his parents, he was preceded in death by his wife of forty-two years, Jane Leach Fender and a daughter, Phyllis Collins. Those left to cherish his memory include two daughters, Donna Letterman, Milligan College, TN and Betty Fender, Erwin, TN; two step-daughters, Mechelle Ward, Idaho and Kathy Lyons, Unicoi, TN; a sister, Mae McNally, Erwin, TN; four grandchildren, Tim Carathers, Laura Letterman, Renia Banner and Iris Banner and four great-grandchildren; his beloved dog, Bertha; special friends, Chuck, Marsha and Carroll. Several nieces, nephews and cousins also survive. A Ceremonial Tribute Service to honor the life of Mr. Ward Fender will be conducted at 2:00 P.M. Saturday, December 30, 2017 in the Sunset Chapel of Hathaway-Percy Funeral and Cremation Services with his nephew, Ron Fender officiating. The family will receive friends at the funeral home from 1:00 – 2:00 P.M. on Saturday prior to the service. Military honors will be accorded by the Carter County Honor Guard. Those who prefer memorials in lieu of flowers may make donations to the Shriner’s/Jericho Temple, P. O. Box 5548, Kingsport, TN 37663 or the St. Jude Children’s Research Hospital, 501 St. Jude Place, Memphis, TN 38105-1942. The family would like to give special thanks to Ron Fender for his love and support and to the staff of the Johnson City Medical Center Hospital for their loving care to Mr. Fender.

Mr. Ward Fender, age 84, a loving father and grandfather of Unicoi, TN passed away unexpectedly Wednesday, December 27, 2017 in the Johnson City Medical Center following a brief illness. A native of Burnsville, NC he was the son of the late... View Obituary & Service Information

The family of Ward Fender created this Life Tributes page to make it easy to share your memories.

Send flowers to the Fender family.