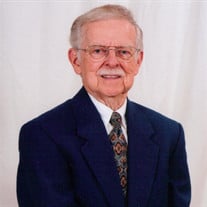 Mr. Walter Lynn Carrier, age 82, of Elizabethton, TN passed away Wednesday, December 27, 2017 in the Life Care Center of Gray after a courageous battle with Alzheimer’s. A native of Carter County, TN he was the son of the late Earnest and Donna Francisco Carrier. Walter retired as business manager for Moody Aviation and the City Airport. He spent his life serving the Lord by working in all aspects of the churches he attended, as Treasurer, Deacon, Sunday School Superintendent and teacher. He was a member of Unaka Baptist Church, Elizabethton where he held many positions. He was also former Treasurer of the Watauga Baptist Association. He enjoyed TN Vol football, VW Beetles and was fascinated with airplanes. In addition to his parents, he was preceded in death by two sisters, Elizabeth Morris and Joann Tabor and a brother, Dr. Ed Carrier. Those left to cherish his memory include his wife, Gail Clemons Carrier, Elizabethton, TN; two daughters, Jennifer Hopland, Johnson City, TN and Candace McNabb and husband Ben, Unicoi, TN; a son, Kirk Carrier and wife Valerie, Elizabethton, TN; eight grandchildren, Jillian Darville, Jessica Barnett, Jared Hopland, Madelyn McNabb, Lydia McNabb, Ryan Mick, Kayla Carrier and Luke Carrier and a brother, James A. Carrier, Elizabethton, TN. Several nieces and nephews also survive. A service to honor the life of Mr. Walter Lynn Carrier will be conducted at 2:00 P.M. Sunday, December 31, 2017 in the Sunset Chapel of Hathaway-Percy Funeral and Cremation Services with Rev. Ray Colbaugh and Rev. Nick Colbaugh officiating. Music will be under the direction of Kenny Greer. The family will receive friends at the funeral home from 1:00 – 2:00 P.M. prior to the funeral service. Interment will follow the funeral service in the Emmert Cemetery. Active pallbearers will be Kirk Carrier, Ryan Mick, Jared Hopland, Luke Carrier, Ben McNabb and James A. Carrier. Honorary pallbearer will be Tim Pierce. Those who prefer memorials in lieu of flowers may make donations to Unaka Baptist Church Mission Fund - Walter Lynn Carrier, 1598 Highway 91, Elizabethton, TN 37643. The family would like to express a special thank you to the nurses and staff at Life Care Center of Gray; Shon Blevins and staff of Pine Ridge Health Care of Elizabethton; Tim and Penny Pierce and Daniel with Avalon Hospice for the loving care to Mr. Carrier.

Mr. Walter Lynn Carrier, age 82, of Elizabethton, TN passed away Wednesday, December 27, 2017 in the Life Care Center of Gray after a courageous battle with Alzheimer&#8217;s. A native of Carter County, TN he was the son of the late Earnest... View Obituary & Service Information

The family of Walter Lynn Carrier created this Life Tributes page to make it easy to share your memories.

Send flowers to the Carrier family.