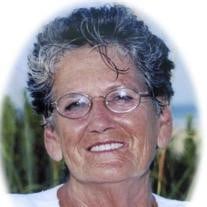 Mrs. Virginia “Jenny” “Mamaw” Holly, 82, of 1400 Garden Road, Elizabethton, went to be with her Lord and her husband on Saturday, May 26, 2012 surrounded by her family and friends following a lengthy illness. She was the daughter of the late Wade Hampton Peters, Sr. and Annie Tabitha Bailey Peters and was born in Roanoke, VA. In addition to her parents, she was preceded in death by her husband, Jackie Lee Holly, Sr. (1991); five brothers, Hampton Edward Peters, Evant Peters, Franklin Peters, Bob Peters and Junior Peters. Mrs. Holly was a homemaker and a member of East Side Christian Church. She loved her family and adored her grandchildren and great-grandchildren. Survivors include one daughter, Dorothy “Dot” Holly Cornett and her husband, Bob, Elizabethton; two sons, Dr. Jack Holly and his wife, Peggy, Elizabethton; Tommy Holly and daughter-in-law, Chris Holly, both of Elizabethton; six grandchildren, Hollie Cornett Pierce and her husband, Timmy; Justin Cornett and his wife, Allison; Tom Holly and his wife, Mandy; Katie Holly Witten and her husband, Shawn; Jason Holly and his wife, LeAnn; Travis Holly and his wife, Anna; twelve great-grandchildren; five sisters, Clara Kelly, Arlene Houchins and Mary Ann Dix, all of Virginia; Shirley Jeffers and her husband, Cecil; Loretta Julian and her husband, Toby, all of Elizabethton; one brother, Bobby Peters and his wife, Minnie, NC. Numerous nieces and nephews also survive. The funeral service will be conducted at 7:00 PM on Tuesday, May 29th at East Side Christian Church with Mr. Randall K. Johnson, Minister officiating. The family will receive friends on Tuesday, May 29th from 5:00 – 7:00 PM prior to the service at the church and at the residence of the daughter, Dot Cornett, 172 Constitution Avenue, Elizabethton at other times. The graveside service and interment will be conducted at 10:00 AM on Wednesday, May 30th at Happy Valley Memorial Park. Active pallbearers will be Jason Holly, Travis Holly, Tom Holly, Timmy Pierce, Justin Cornett and Shawn Witten. Honorary pallbearers will be the members of East Side Christian Church. Everyone will meet at Hathaway Percy Funeral and Cremation Services at 9:15 AM on Wednesday to go in procession to the cemetery. Those who prefer memorials in lieu of flowers, may make donations to the East Side Christian Church, 1400 Siam Road, Elizabethton, TN 37643.

Mrs. Virginia “Jenny” “Mamaw” Holly, 82, of 1400 Garden Road, Elizabethton, went to be with her Lord and her husband on Saturday, May 26, 2012 surrounded by her family and friends following a lengthy illness. She was the daughter of the late... View Obituary & Service Information

The family of Virginia "Jenny" "Mamaw" Holly created this Life Tributes page to make it easy to share your memories.

Send flowers to the Holly family.