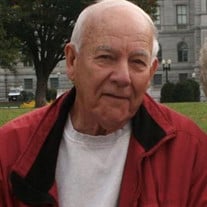 Verlin “Vern” White, age 86, of Elizabethton, TN passed away Saturday, March 23, 2019 in the Hillview Health Center. A native of Elizabethton, he was the son of the late Joseph Frank and Sallie Pierce White. He retired as a plant engineer. Mr. White was a U.S. Army veteran and was a member of the Garrettsville Masonic Lodge #246 in Garrettsville, OH and the Jericho Temple #180 of Kingsport where he loved working for children. He also was an officer in the Legion of Honor in Kingsport and a member of the Jesters. Mr. White enjoyed golfing and working on cars. In addition to his parents, he was preceded in death by his wife, Nancy J. Elgin White; three sisters, Christine McKinney, Emma Johnson and Mable Matthews and a brother, Ed White. Those left to cherish his memory include a son, Steven L. White and Linda Troyer, Garrettsville, OH; special friend, Jean Lowe, of the home; a grandson and sidekick, Caleb Richardson, of the home; nephews, Doug Hicks, Norwood, NC, Steven Wallace, Butler, TN and Hillary Wallace, Mountain City, TN and a great-niece, Lisa Blevins, Elizabethton, TN. A Gathering of Remembrance to honor the life of Verlin “Vern” White will be conducted at 3:00 P.M. Thursday, March 28, 2019 in the Sunset Chapel of Hathaway-Percy Funeral and Cremation Services with Shriner Chaplain Todd Monroe officiating. The family will receive friends at the funeral home from 1:00 – 3:00 P.M. on Thursday prior to the service. Committal service will be held at a later date in the Maple Grove Cemetery in Ravenna, OH. Those who prefer memorial in lieu of flowers may make donations to the Shriner’s Hospital for Children/Jericho Temple, P. O. Box 5548, Kingsport, TN 37663.

Verlin &#8220;Vern&#8221; White, age 86, of Elizabethton, TN passed away Saturday, March 23, 2019 in the Hillview Health Center. A native of Elizabethton, he was the son of the late Joseph Frank and Sallie Pierce White. He retired as a plant... View Obituary & Service Information

The family of Verlin "Vern" White created this Life Tributes page to make it easy to share your memories.

Send flowers to the White family.