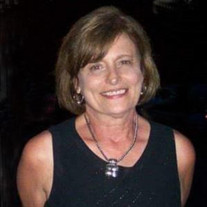 Tana Starr Broome Johnson, age 64, went home to be with the Lord and Savior on June 4, 2020. Tana was born to the late Horace Arnold Broome, Jr. and Grace Lee Hopson Broome on December 30, 1955. Tana grew up in Elizabethton, Tennessee and graduated from Elizabethton High School in 1973. She was a cheerleader for the Betsy Cyclones and in the fall of 1973, she was chosen to be EHS’ Homecoming Queen. Always a class favorite, Tana had a beautiful, radiant smile and contagious giggle. She was loved by all that knew her. After high school, Tana attended and graduated from ETSU’s Marshall T. Nave Paramedical Center. She worked in the dental field briefly, but found true professional success in her accomplished career with the James H Quillen Veterans Administration at Mountain Home in Johnson City, Tennessee. Tana began working at the VA in 1986 and retired as Assistant Chief of Human Resources in 2018. Tana was a loving and caring woman of strong faith, which was demonstrated in her love and devotion to her family. She had an immense love of animals, especially dogs. She had many pets during her lifetime which she loved, including the two she left behind, Charlie and Blue. Tana found true love and contentment with her husband, Michael. They were married in 2000 and enjoyed 20+ years of marriage which included their joy of traveling and loving one another. Together they loved and served the Lord in many ways throughout their community. While Tana grew up and was a member at Immanuel Baptist Church, she later became a member of Grace Baptist Church and attended Dungan Chapel Baptist Church more recently. Tana was active with Gideon’s Auxiliary of which she was President of the Carter County Chapter. She and Michael volunteered with Hale Ministries, as well as other organizations in the Elizabethton area. Tana was a faithful servant who loved the Lord and wanted others to know of His love. In addition to her parents, she was preceded in death by her brother, Horace A. “Bubba “ Broome III, and a niece, Whitney Shea Broome. Those left to cherish her memories include her husband, Michael Johnson of the home; a brother, Rick Lee Broome and wife Teresa, of Elizabethton. A niece, Mackenzie Danielle Broome, Johnson City, a special cousin, Stella Francis of Jonesborough. Several nieces, nephews, and cousins also survive. A graveside service to honor the life of Tana Starr Broome Johnson will be conducted at 2:00 P.M, Sunday June 07, 2020 at Happy Valley Memorial Park with Mr. Ben Cole, Minister officiating, and Pastor Chris Hughes, soloist. Active Pallbearers include, Robert Broome, Ed Garland, Joe Alexander, Dale Fair, Kerwin Fulton, and Ben Cole. Honorary pallbearers will be, Rev. Garry Edwards, Rev. Dean Smith, Rev. Eric Heaton, and Rev. Travis Tyler. Those wishing to attend the graveside service are asked to meet at the cemetery at 1:50 P.M. on Sunday, June 07, 2020. The family would like to give a special thanks to all the ministers that visited Tana during her illness, and all the cards she received. It helped her to know that she was still loved and had support from all her friends during this Covid crisis. Those who prefer memorials in lieu of flowers may make donations to St. Jude’s Children’s Hospital; 501 St. Jude Place Memphis, TN 38105, and Gideon’s International; 609 E Elk Ave, Elizabethton, TN 37643.

Tana Starr Broome Johnson, age 64, went home to be with the Lord and Savior on June 4, 2020. Tana was born to the late Horace Arnold Broome, Jr. and Grace Lee Hopson Broome on December 30, 1955. Tana grew up in Elizabethton, Tennessee and... View Obituary & Service Information

The family of Tana Starr Broome Johnson created this Life Tributes page to make it easy to share your memories.

Tana Starr Broome Johnson, age 64, went home to be with the Lord...

Send flowers to the Johnson family.