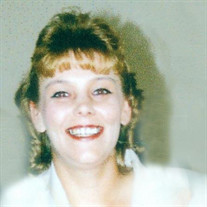 Tabitha Madge Rush, age 38, of Jonesborough, TN passed away Tuesday, November 11, 2014 at her residence. A native of Washington County, TN she was the daughter of Mack Presnell Sr. and Eleanor Faye Douglas Presnell, of Johnson City. Tabitha was a homemaker and volunteered at the consignment shop in Gray. She was of the Pentecostal faith. Tabitha was preceded in death by her grandparents, her mother-in-law and aunts and uncles. Survivors in addition to her parents include her husband, Alan Rush; two daughters, Josie Sparks and Kaycee Rush and a grandson, Malachi Smalling, all of Jonesborough; a brother, Mack Presnell Jr., Gate City, VA; two nieces, Olivia Presnell and Kateylin Presnell, both of Elizabethton; special aunt and uncle, Harold and Elsie Presnell, Hampton. Many other aunts, uncles and cousins and her best friend, Jennifer Graham, Elizabethton also survive. A service to honor the life of Tabitha Madge Rush will be conducted at 7:00 P.M. Saturday, November 15, 2014 in the Sunset Chapel of Hathaway-Percy Funeral and Cremation Services with Rev. Dean Presnell and Rev. Mack Presnell Sr. officiating. Music will be under the direction of Harold Presnell, Michael Presnell and Tammy Murray. The family will receive friends at the funeral home from 5:00 – 7:00 P.M. on Saturday prior to the service. Graveside service and interment will be conducted at 2:00 P.M. Sunday, November 16, 2014 in the Markland Cemetery. Active pallbearers will be Robert Presnell, Billy Presnell, Donald Puckett Jr., Steve Presnell, Samuel Martin and Jason Martin. Honorary pallbearers will be Mike Brown, Mack Presnell Jr., Ted Muncy, Matt Renfro and Rusty Sparks. Everyone will meet at the funeral home at 1:00 P.M. on Sunday to go in procession to the cemetery.

The family of Tabitha Madge Rush created this Life Tributes page to make it easy to share your memories.

Send flowers to the Rush family.