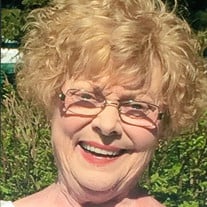 Susan Kay Zollinger Hill, age 73, of Johnson City, TN passed away quietly on Tuesday, September 4, 2018 at the residence of her daughter. A native of Elkhart, IN she was the daughter of Ellen Kresge, Elizabethton, TN and the late Donald E. Kiser Sr. Susan worked as an accountant at Atlas Die in Elkhart, IN. She had served as a past secretary of the Evening Civitan in Elkhart, IN and had been a volunteer with the Johnson City Senior Citizen’s Center. She attended Oakland Avenue Baptist Church, Johnson City. Susan’s greatest love was her family. In addition to her father she was preceded in death by her husband, Donald Odell Hill; a brother, Donald Kiser Jr. and her step-father, Douglas Kresge. Those left to cherish her memory in addition to her mother include a daughter, Debra Williams and husband Jack, Johnson City; a son, Stephen Zollinger and wife Janie, Johnson City; a step-daughter, Cathy Cook, Texas; three grandchildren, Jessica Denny and husband Scott, Andrew Williams and wife Crystal and Matthew Zollinger; and three great-grandchildren, Cole Denny, Connor Denny and Riley Drew Williams. A service to honor the life of Susan Kay Zollinger Hill will be conducted at 2:00 P.M. Friday, September 7, 2018 in the Sunset Chapel of Hathaway-Percy Funeral and Cremation Services with Rev. Roy Yelton officiating. The family will receive friends at the funeral home from 12:00 – 2:00 P.M. on Friday prior to the funeral service or at the residence of her daughter at other times. Interment will follow the funeral service on Friday in the Whitehead Hill Cemetery, Hampton, TN. Active pallbearers will be selected from family and friends. The family would like to express a special thank you to Mountain States/Ballad Hospice for their loving care to their mother; to Ivy Hall Nursing Home for their continued care to Susan’s mother and to a very special friend from high school who kept in contact with Susan until her passing.

Susan Kay Zollinger Hill, age 73, of Johnson City, TN passed away quietly on Tuesday, September 4, 2018 at the residence of her daughter. A native of Elkhart, IN she was the daughter of Ellen Kresge, Elizabethton, TN and the late Donald E.... View Obituary & Service Information

The family of Susan Kay Zollinger Hill created this Life Tributes page to make it easy to share your memories.

Send flowers to the Hill family.