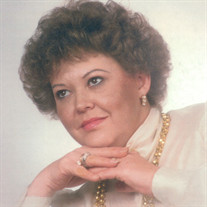 Susan Jane Kyte Lowe, age 63, a loving mother, sister and aunt of Elizabethton, TN passed away Wednesday, December 27, 2017 at Sycamore Shoals Hospital. She was the daughter of the late Beulah “Meme” Robinson Kyte. Jane was a homemaker who was the neighborhood Mom to kids. She was a member of First Freewill Baptist Church in Elizabethton. She enjoyed knitting, crocheting and her animals and she loved Christmas time. In addition to her mother, she was preceded in death by a sister, Puanana Elliott; a step-son, Monty Lowe and a niece, Victoria “Tora” Orren. Those left to cherish her memory include a son, Noah Lowe and his fiancé and Jane’s caregiver, Amanda Wilson, both of Elizabethton; her husband and loving friend, C. Raymond Lowe, Elizabethton; three step-children, Ricky Lowe and wife Tracey, Joey Lowe and wife Lisa, Sonja Holtsclaw and husband Rick, all of Elizabethton; two grandchildren, Kelsey Cullop and Christian Lowe and several step-grandchildren; two sisters, Rosalonia Edwards, Elizabethton and Sharon Fritts, Missouri. Several nieces and nephews including three special nieces, Tina Garrison, Rosa Colbaugh and Joann Handy, all of Elizabethton and several great-nieces and great-nephews also survive. A graveside service to honor the life of Susan Jane Kyte Lowe will be conducted at 3:00 P.M. Friday, December 29, 2017 in Happy Valley Memorial Park with Pastor Nathan Jennings officiating. Active pallbearers will be selected from family and friends. Everyone will meet at Hathaway-Percy Funeral and Cremation Services at 2:15 P.M. on Friday to go in procession to the cemetery. Friends may visit the family at the residence at any time. It was Jane’s wish that those who choose to send flowers, send only one rose. Those who prefer may make donations to the family to help with final expenses.

The family of Susan Jane Kyte Lowe created this Life Tributes page to make it easy to share your memories.

Send flowers to the Lowe family.