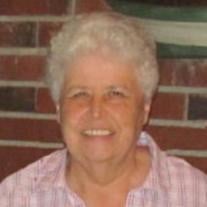 Sherry “Dee” Britt Hutchins, age 70, of Elizabethton, went home to be with her Lord and Savior on Monday, October 29, 2012 at the Franklin Woods Community Hospital, following a brief illness. A native of Carter County, she was a daughter of the late U.G. “Bobby” and Beulah Smith Britt. Dee had worked for 17 years as a cook for the Elizabethton School System at T.A. Dugger Junior High School. She was very strong in her faith and had served as a church pianist for 40 years. She was a member of Big Springs Baptist Church, and was currently serving as pianist at Happy Valley Baptist Church. Dee also enjoyed attending church with her daughter at Hunter First Baptist Church. Mrs. Hutchins was an avid fan of Pat Summit and the UT Lady Vols. She enjoyed baking the desserts for Harbor House Restaurant, which is owned by her daughter and son-in-law. Her real joy came from spending time with her grandchildren, whom she greatly adored. In addition to her parents, Dee was preceded in death by an infant brother. She is survived by her loving husband, Charles Farrell Hutchins, of the home; two sons, Charles Hutchins and his girlfriend, Wendy Wright, and Jeff Hutchins, all of Elizabethton; a daughter and son-in-law, Karen and Jon Barnett, Elizabethton; three grandchildren, Madisson Barnett, Maison Barnett, and Megan Hutchins, all of Elizabethton; two brothers, Bobby G. Britt and wife, Anna Sue, Johnson City, and Tyler Britt, Elizabethton; and a sister, Sheila Clark and husband, Louis, of Wilson, NC. Several nieces and nephews also survive. The funeral service for Sherry “Dee” Hutchins will be conducted at 2:00 PM Wednesday, October 31, 2012 in the Sunset Chapel of Hathaway-Percy Funeral and Cremation Services with Rev. John Perkins and Rev. Kenneth Kyker officiating. Music will be under the direction of Mr. Scott Reynolds, pianist, and Mr. Eddie McGee, soloist. The family will receive friends on Wednesday from Noon-2:00 PM in the funeral home chapel prior to the service or at the residence other times. The graveside service will be conducted on Wednesday immediately following the funeral in the Mausoleum of Peace at Happy Valley Memorial Park with Rev. Dennis Wilson officiating. Active pallbearers will be Dan Britt, Mark Hill, John Hutchins, Terry Buckles, Joseph Barnett, and Jamie Combs. Honorary pallbearers are Terry Britt, Jack Clark, Robert Clark, Marty Grenchik, Tony Barnett, Don McKeehan, Greg Barnett, Bobby Emmert, Billy Mathis, Randall Hutchins, her friends at Happy Valley Baptist Church, Hunter First Baptist Church, and Big Springs Baptist Church, and a special friend, Bryan Hamm. Those wishing to attend the graveside will travel in procession to the cemetery. For those who desire, memorial contributions may be made in lieu of flowers to the TN Baptist Children’s Home, 1310 Franklin Rd, Brentwood, TN 37027 or to Happy Valley Baptist Church, 2118-A Forsyth Drive, Elizabethton, TN 37643.

Sherry “Dee” Britt Hutchins, age 70, of Elizabethton, went home to be with her Lord and Savior on Monday, October 29, 2012 at the Franklin Woods Community Hospital, following a brief illness. A native of Carter County, she was a daughter of... View Obituary & Service Information

The family of Sherry "Dee" Britt Hutchins created this Life Tributes page to make it easy to share your memories.

Send flowers to the Hutchins family.