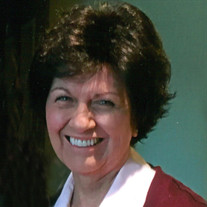 Sherry Lynn Lipford Kyte, age 71, of Elizabethton, TN passed away Tuesday, September 4, 2018 at her residence. She was born to Glenn (Buster) Lipford and Margaret Peters Lipford Edens on July 17, 1947, in Johnson County, TN, but lived most of her life in Carter County. She was proceeded in death by her parents, grandparents, Earl and Pearl Lipford of Butler, and Elijah and Ellen Eggers Peters of Elizabethton and two aunts, Ruth Lipford Williams and Mildred Peters Hart. Sherry was a graduate of Happy Valley High School, Class of 1965. She worked at Sears for eight and one-half years and retired from Elizabethton Federal Savings Bank after thirty-nine and one-half years. She is survived by her loving husband of fifty-three years, James Russell Kyte; a devoted son, David Glen Kyte, Elizabethton, TN; her favorite granddaughter, Taylor Jules Kyte, Charlotte, NC; one sister, Glenda (Wayne) Treadway, Dandridge, TN; one nephew, William Glenn Treadway, Murray, KY; cousin/sister, Sue Carol (Darrell) Ward, Butler, TN and many cousins. Sherry was also blessed with a large family of Kyte-in-laws, whom she loved dearly; special friends, Sherry Maines and Ginny McGee; her Sims Hill Christian Church family; members of The Followers Sunday School Class and special Elizabethton Federal Bank family. Special caregivers to Sherry were Teresa Phipps, Linda Henry, Shoddie Kyte, Sherry Maines, Ginny McGee, Debbie Reeser, Sue Carol Ward and Glenda Treadway. Sherry was an active member of Sims Hill Christian Church where she served on several committees including the Youth Committee. She taught children to love Jesus for over fifty years. Being a witness for Jesus was her passion and her faith in Jesus never wavered. She was a strength to all and set an awesome example to her family and friends on how to live for Jesus and love others on a daily basis. A service to honor the life of Sherry Lynn Lipford Kyte will be conducted at 7:00 P.M. Thursday, September 6, 2018 in the Sunset Chapel of Hathaway-Percy Funeral and Cremation Services with Mr. Bret Jones, minister officiating. Music will be under the direction of Lisa Carter. The family will receive friends at the funeral from 5:00 P.M. until 7:00 P.M. prior to the funeral service. Graveside service and interment will be conducted at 10:00 A.M. Friday, September 7, 2018 in the Butler Memorial Cemetery. Active pallbearers will be Jamie Ward, William Treadway, Mark Henry, Jason Kyte, Brian Kyte, Jake Johnson, Ricky Kyte and David Kyte. Honorary pallbearers will be Jay Kyte, Don Kyte, Charles Phipps, Dennis Kyte, Mack Henry, Steve Kyte, Wayne Treadway and Darrell Ward. Everyone will meet at the cemetery at 9:50 A.M. on Friday. The family would like to thank everyone for the cards, visits, food and especially the prayers. Amedisys Hospice for their care and concern. In lieu of flowers, donations may be made to Sims Hill Christian Church Youth Fund, in care of Adam Reeser, 206 Sims Hill Road, Elizabethton, TN 37643.

Sherry Lynn Lipford Kyte, age 71, of Elizabethton, TN passed away Tuesday, September 4, 2018 at her residence. She was born to Glenn (Buster) Lipford and Margaret Peters Lipford Edens on July 17, 1947, in Johnson County, TN, but lived most... View Obituary & Service Information

The family of Sherry Lynn Lipford Kyte created this Life Tributes page to make it easy to share your memories.

Send flowers to the Kyte family.