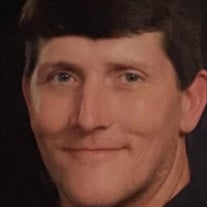 Scott Causby, age 49, of Elizabethton, TN passed away Friday, January 21, 2022 at Johnson City Medical Center. He was born in Morganton, NC to Naomi Jean Causby and the late Mills Causby. Scott attended Valley Forge Freewill Baptist Church. He enjoyed fishing, camping, taking care of neighbor’s yardwork and spending time with his dog, Jasper. In addition to his father he was preceded in death by his maternal grandparents, Bonnie Mae Wilson and Herbert Wilson and paternal grandparents, Addie Causby and Margaret Causby. Those left to cherish his memory are his mother, Naomi Wilson Causby, of the home; daughter, Tiara Causby, of the home; two sons, Tristan Causby and fiancé, Bethany King and Tyler Price, of Elizabethton; two brothers, Victor Causby, of Gloucester, VA and Jeffrey Causby and wife Penny, of Elizabethton; nephew, Logan Causby, of Smithville, VA and a niece, Victoria Causby, of Gloucester, VA. A service to celebrate the life of Scott Causby will be held at 7:00 P.M. on Thursday, January 27, 2022 at Valley Forge Freewill Baptist Church with Randy Johnson and Mark Potter officiating. The family will receive friends between the hours of 5:00 P.M. and 7:00 P.M. prior to the service on Thursday. A private disposition will be held at a later date. Online condolences may be shared with the family and viewed on our website at www.hathawaypercy.com. Hathaway-Percy Funeral and Cremation Services are honored to serve the Causby family. Office: 423-543-5544

The family of Scott Causby created this Life Tributes page to make it easy to share your memories.

Send flowers to the Causby family.