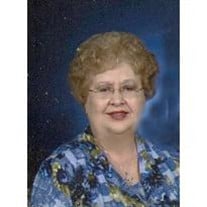 Sandra “Sandy” Berry Grindstaff, 61, 225 Big Springs Road, Elizabethton, went home to be with her Heavenly Father, from the Johnson City Medical Center Hospital, following a brief illness on Saturday, February 12, 2011. She was the daughter of the late Rev. Earl James and Margaret Emmert Berry and was born in Carter County. In addition to her parents, she was preceded in death by her grandparents, Bill and Mimmie Gregory Berry and Ernest and Viva Clark Emmert. Sandy was a 1967 graduate of Happy High School. She was an LPN having worked at the old Carter County Memorial Hospital and the Vanderbilt Hospital in Nashville. She worked at Carter County Bank before retiring on disability after thirty-four years of service. Sandy loved going to her church, Pleasant Beach Baptist. She loved Happy Valley High School basketball, the Elizabethton Twins and the Cruse-IN in downtown Elizabethton. She especially loved talking with her many friends. She is survived by her husband, Dawson Grindstaff, of the home; a brother-in-law, William Macarthur Grindstaff and his wife, Phyllis, Elizabethton; a sister-in-law, Geneva Grindstaff Phillips, Church Hill; three special uncles, Lawrence Berry and his wife, Nancy, Carl Berry and his wife, Helen, all of Elizabethton; Clarence Berry and his wife, Sue, KY; special friends, Shirley and Homer Miller and Joann and Ed Marley, all of Elizabethton; as well as the employees of Carter County Bank. She is also survived by her very special little friend, Kameron Martin of Elizabethton and several nieces, nephews, great-nieces, great-nephews and cousins also survive. The funeral service for Mrs. Grindstaff will be conducted at 8:00 PM on Tuesday, February 15, 2011 in the Sunset Chapel of Hathaway-Percy Funeral Home with Pastor Bobby Stout and Rev. Charles Biggs, officiating. Music will be under the direction of Greg and Tammy Ruston and the Pleasant Beach Quartet. The family will receive friends in the funeral home chapel from 6:00 – 8:00 PM Tuesday prior to the service. The graveside service and interment will be conducted on Wednesday, February 16, 2011 at Noon in the Happy Valley Memorial Park. Active pallbearers will be Michael Grindstaff, Robert Bordeaux, Beau Phillips, Charles Berry, James Berry and Ronnie Berry. Honorary pallbearers will be Lawrence Anthony Berry, Keith Berry, Ricky Berry and Jeff Berry. Those wishing to attend are asked to meet at the funeral home 11:15 AM to go in procession to the cemetery. Those who prefer memorials in lieu of flowers may make donations to the American Heart Association, 3101 Brown’s Mill Road, Johnson City, TN, 37604 or the American Kidney Foundation, 6110 Executive Blvd., Suite 1010, Rockville, MD, 50852. The family would like to express a special thank you to Dr. Martin Tran, Dr. Jeff Farrow and all the nurses and other staff members of the 5500 Wing of Johnson City Medical Center Hospital for all the love and care shown to Sandy and to her family.

The family of Sandra "Sandy" Berry Grindstaff created this Life Tributes page to make it easy to share your memories.

Send flowers to the Grindstaff family.