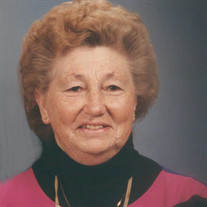 Ruby I. Ferguson, age 98, of Elizabethton TN, passed away June, 18, 2020 at Ivy Hall Nursing Home. She was the daughter of the late, Roby Richardson, and Audie Eller Richardson. Ruby was a member of First Christian Church in Elizabethton TN. She was a seamstress, and loved to cook, garden, work puzzles and spend time with her family. Her grandchildren and great-grandchildren was her life. In addition to her parents, she was preceded in death by her husband, James L. Ferguson, one son, Phillip D. Ferguson, five sisters, and five brothers. Those left to cherish her memories include her three sons, James E. Ferguson, and wife Sonja Ferguson, Sam L. Ferguson, and wife Carolyn Ferguson, David R. Ferguson, and wife Kristy Ferguson all of Elizabethton TN. Four Grandchildren; Wendy Campbell, Telford TN, Pastor Jamie Ferguson, Carolee Hughes, and Phillip D. Ferguson all of Elizabethton TN. Three Grandchildren; Andrew David Ferguson, Abigail Ferguson, and Samuel L. Ferguson, all of Elizabethton TN, and several nieces and nephews also survive. A graveside service to honor the life of Ruby I. Ferguson will be conducted at 11:00 A.M, Monday, June 22nd, 2020 at Highland Cemetery with Pastor Jamie Ferguson, and Mr. Michael Klaus, Minister officiating. Active pallbearers will be Rick Campbell, Phillip Ferguson, Andrew Ferguson, Curtis Hughes, Bob Miller, and Joe Nance. Honorary Pallbearers will be Samuel Ferguson, Robert Medley, Michael Medley, Mike Taylor, and Dr. David Mills. Those who will be attending are asked to meet at the funeral home at 10:15 A.M. Monday to go into procession to the Cemetery. Friends may come by Hathaway-Percy Funeral and Cremation Services to sign the guestbook and pay their respects on Sunday, June 21st, 2020 from 10:00A.M. to 4:00 P.M. The family would like to express a special thank you to Ivy Hall Nursing Home and Caris Hospice for the loving care giving to Ms. Ferguson during her illness. Those who prefer memorials in Lieu of flowers may make donations to Gideons International P.O. Box 652 Elizabethton, TN 37644-0652

Ruby I. Ferguson, age 98, of Elizabethton TN, passed away June, 18, 2020 at Ivy Hall Nursing Home. She was the daughter of the late, Roby Richardson, and Audie Eller Richardson. Ruby was a member of First Christian Church in Elizabethton TN.... View Obituary & Service Information

The family of Ruby I. Ferguson created this Life Tributes page to make it easy to share your memories.

Send flowers to the Ferguson family.