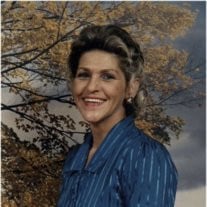 Mrs. Rose Ann Stanley Carriger, age 63, of Elizabethton, TN passed away Monday, March 4, 2013 at the Johnson City Medical Center following an extended illness. A native of Carter County, she was the daughter of the late Charlie and Ruby Ann Watson Stanley. Mrs. Carriger retired from East Tennessee Undergarment. She was of the Christian faith and was a life member of the Ladies Auxiliary of the Veterans of Foreign Wars and was a member of the Order of the Easter Star, Sycamore Chapter. Mrs. Carriger never met a stranger and was always willing to help anybody. She enjoyed gardening, listening to WBEJ Radio “Swap and Shop” and Dr. Charles Stanley. In addition to her parents, she was preceded in death by two sisters and a brother-in-law, Grace Vine and her husband Norman and Opal Gail Whitehead and one brother, Robert Lee Stanley. Survivors include her husband, Roy A. Carriger, of the home; two sons, Hugh Allen Thomason and Charles Eddie Thomason and wife Judy, all of Elizabethton; two grandchildren, William Harlen Thomason and Misty Anna Thomason, both of Elizabethton; a brother, Paul Nolan Stanley and wife Janet, Las Vegas, NV; a step-daughter, Ellen Taylor and husband Skip, Elizabethton; a step-son, Robert Allen Carriger and wife Nicole, Elizabethton; five step-grandchildren, Emily Townsend and husband Garett, Wesley Wright and wife Nikki, Chelsey Wright, McKenzie Carriger, Stephanie Carriger and two step-great-grandchildren, Julian and Braxton Wright. Several nieces and nephews also survive. Funeral service for Mrs. Rose Ann Stanley Carriger will be conducted at 7:00 P.M. Thursday, March 7, 2013 in the Sunset Chapel of Hathaway-Percy Funeral and Cremation Services with Mr. Randle Johnson, minister officiating. The family will receive friends at the funeral home from 5:00-7:00 P.M. on Thursday prior to the service or at the residence of a son and daughter-in-law, Eddie and Judy Thomason, 161 Wilbur Dam Road, Elizabethton at other times. Graveside service and interment will be conducted at 11:00 A.M. Friday, March 8, 2013 in Happy Valley Memorial Park. Active pallbearers will be selected from family and friends. Everyone will meet at the funeral home at 10:15 A.M. on Friday to go in procession to the cemetery. The family would like to express a special thanks to the nursing staff of the Johnson City Medical Center for their loving care of Mrs. Carriger. Those who prefer memorials in lieu of flowers may make donations to the American Cancer Society, c/o Lou Cooter, 415 Washington Avenue, Elizabethton, TN 37643.

Mrs. Rose Ann Stanley Carriger, age 63, of Elizabethton, TN passed away Monday, March 4, 2013 at the Johnson City Medical Center following an extended illness. A native of Carter County, she was the daughter of the late Charlie and Ruby Ann... View Obituary & Service Information

The family of Rose Ann Stanley Carriger created this Life Tributes page to make it easy to share your memories.

Send flowers to the Carriger family.