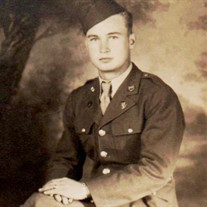 Mr. Ronald Sluder, age 96, of Roan Mountain, TN passed away Wednesday, May 23, 2018 at his residence. A native of Newland, NC he was the son of the late Galen and Ida Waycaster Sluder. “Pap” retired from growing and selling shrubbery. He was a 20 year U.S. Army veteran having served during World War II. He loved to feed animals. In addition to his parents, he was preceded in death by a step-daughter, Barbara Doty and the mother of his children, Marie Simerly Sluder. Those left to cherish his memory include three sons, Keith “Joe” Sluder (Enola “Tiny”); Kenneth Sluder (Tammy) and Harold Sluder (Ruth), all of Roan Mountain; three step-sons, Floyd “Bud” Odom, Roan Mountain; Johnny Odom (Sharon), Chicago, IL and J.D. “PeeWee” Burleson, Hampton; a step-brother-in-law, Dwight Doty, Unicoi; three grandchildren, Misty Black, NC; Dustin Sluder (Heidi), Juno, Alaska and Nick Sluder (Amber), Roan Mountain and three great-grandchildren, Harlee Black, Damian Black and J.J. Black. A service to honor the life of Mr. Ronald Sluder will be conducted at 2:00 P.M. Tuesday, May 29, 2018 in the Rhododendron Chapel, Roan Mountain with Rev. Richard Stout officiating. Music will be under the direction of Rick Holtsclaw. The family will receive friends at the Rhododendron Chapel from 1:00 – 2:00 P.M. on Tuesday prior to the service or at the residence of a son, Keith “Joe” Sluder at other times. Graveside service and interment will follow the funeral service in the Johnson Cemetery of the Crabtree Community, Roan Mountain on Tuesday. Active pallbearers will be his son “Joe’s” Mason Brothers from Lodge #566; Willie Shell, Mike Smith, Mike Powell, Nick Sluder, Dustin Sluder and Jamie Shell. Honorary pallbearers will be Wilma, Lisa and all the girls at the Cloudland Market and Rev. Jerry Honeycutt. Military honors will be accorded by the Carter County Honor Guard. The family would like to express a special thank you to Tammy Sluder and Ruth Smith for their help in the care of “Pap” during his illness. Those who prefer memorials in lieu of flowers may make donations to the Memorial and Honor Program, St. Jude Children’s Research Hospital, 501 St. Jude Place, Memphis, TN 38105-1942.

Mr. Ronald Sluder, age 96, of Roan Mountain, TN passed away Wednesday, May 23, 2018 at his residence. A native of Newland, NC he was the son of the late Galen and Ida Waycaster Sluder. &#8220;Pap&#8221; retired from growing and selling shrubbery.... View Obituary & Service Information

The family of Ronald Sluder created this Life Tributes page to make it easy to share your memories.

Send flowers to the Sluder family.