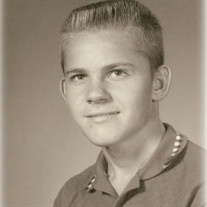 Roger L. Hale, age 70, of Gray, TN died Saturday evening, April 15, 2017 in the V.A. Nursing Home, Mountain Home, TN following a lengthy illness. Mr. Hale was a lifelong resident of Sullivan County and was the son of the late Gene and Monta Torbett Hale of Piney Flats. He was of the Baptist faith and attended Gray Station Baptist Church. Roger found pleasure and accomplishment in his employment at Tennessee Florist Supply in Bristol, TN and later driving transport carriers for Crete Carriers in Kingsport, TN. He was a U.S. Navy veteran having served during the Vietnam era. Mr. Hale was preceded in death by his loving wife, Barbara Barr Hale who passed away in 2011; two sisters, Clara Gail Hale and Sally Hale Boyer and three brothers, Eugene Lewis (Shade) Hale, Arnold Hale and Charles Hale. Survivors include two sons, Jonathan Hale and Daniel Hale, both of the home; two sisters-in-law, Besse Hale and Pamela Barr, both of Piney Flats and an uncle, E. A. Torbett Jr., Piney Flats. Several cousins, nieces and nephews also survive. A service to honor the life of Roger L. Hale will be conducted at 7:00 P.M. Tuesday, April 18, 2017 in the Sunset Chapel of Hathaway-Percy Funeral and Cremation Services with Rev. Arden Taylor officiating. The family will receive friends at the funeral home from 6:00 – 7:00 P.M. on Tuesday prior to the service. Graveside service and interment will be conducted at 2:30 P.M. Wednesday, April 19, 2017 in Mountain Home National Cemetery. Military honors will be accorded by the Carter County Honor Guard. Honorary pallbearers will be Rev. Steve Corona, Dean Torbett, Roger Roden, E. A. Torbett Jr., Wayne Torbett, Dwight Douglas, Dickie Torbett, Keith Ingram, Kenneth King and Richard Good. Everyone will meet at Hathaway-Percy at 1:30 P.M. on Wednesday to go in procession to the cemetery. The Hale family would like to extend heartfelt thanks to the staff of the V.A. Nursing Home, Mountain Home facility and also to all the doctors and nurses who cared for Roger during his illness. Those who desire memorials in lieu of flowers may make donations to Hathaway-Percy Funeral and Cremation Services, 101 East F Street, Elizabethton, TN 37643 to help the family with funeral expenses.

The family of Roger L. Hale created this Life Tributes page to make it easy to share your memories.

Send flowers to the Hale family.