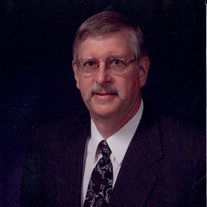 Mr. Richard James Bradley, 60, of Elizabethton, went home to be with his Lord, on Friday, January 1, 2016 at his home following a courageous and long fight with cancer. He was the son of the late James and Kathryn Webb Bradley and was born in Carter County. Richard was a 1973 graduate of Elizabethton High School and was employed by Eastman Chemical. He was a loving husband, father and grandfather. He was a life-long, dedicated and faithful member of First United Methodist Church in Elizabethton where he served as a Sunday School teacher and had been a member of many committees over the years. He was very active in the Second Harvest Food Bank ministry of the church, was an avid Boy Scout leader and loved to ride his motorcycle. He was a jack of all trades and a master of none. Those left to cherish his memory include his wife, Sonya Grindstaff Bradley, of the home; a son and daughter-in-law, Wesley R. and Jennifer Bradley; Elizabethton; a daughter and son-in-law, Erin and Jeff Weatherford; two grandchildren, Ryan Jay Weatherford and Jewell Weatherford; all of Johnson City; a step-grandson, Jeffrey Weatherford; Bainbridge, GA; a sister, Brenda Bradley Jones, Canton, GA; a very special aunt, Verna McLain, Knoxville; his very special friends, Linda and Troy Brown, Elizabethton. Nieces and nephews, Jaimie Jones, Canton, GA; Chasity Skeans, Mackenzie Skeans, Jonathan Grindstaff, Chad Grindstaff, Alan Skeans, and Andrew Grindstaff also survive. The Celebration of Life service for Mr. Bradley will be conducted on Tuesday, January 5, 2016 at 7:00 PM at First United Methodist Church in Elizabethton with Rev. Raymond W. Amos, Sr. officiating. Music will be under the direction of the Mr. Tyler Fleming, the Chancel Choir of First United Methodist Church and Mr. David Arney. The family will receive friends in the church from 5:00 – 7:00 PM on Tuesday prior to the service and at the home at other times. Honorary pallbearers will be Hal Jones, David Grindstaff, Bob Grindstaff, Troy Brown, Bruce Cakebread, Richard Robinson, Richard Lovette and Jay Joseph. Disposition will be scheduled for a later time. Those who prefer memorials in lieu of flowers may make donations to either Second Harvest Food Bank, C/O First United Methodist Church, 325 East E Street, Elizabethton, TN, 37643 or to the Memorial Fund at First United Methodist Church.

Mr. Richard James Bradley, 60, of Elizabethton, went home to be with his Lord, on Friday, January 1, 2016 at his home following a courageous and long fight with cancer. He was the son of the late James and Kathryn Webb Bradley and was born... View Obituary & Service Information

The family of Richard James Bradley created this Life Tributes page to make it easy to share your memories.

Send flowers to the Bradley family.