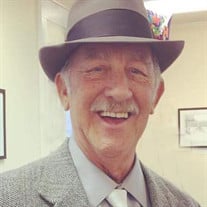 Mr. Paul J. Osborne Sr., age 70, of Hampton, TN a loving husband and father made his crossing on Saturday, April 8, 2017 in the Johnson City Medical Center. A native of Erwin, TN he was the son of the late Rev. Carl Osborne and Myrtle Brummitt Osborne. Mr. Osborne retired as a Chief of Police of Caswell Beach, NC, and served as a Peace Officer for 38 Yrs. He was a member of Zion Baptist Church, Elizabethton and he was a member of the South Eastern Autorama and the East TN Model “A” Restorer’s Club. He was a U.S. Army/Navy veteran having served during the Vietnam era. Mr. Osborne had a special light within him, he was an extraordinary person who lived life to the fullest. He was extremely passionate about his family and church and put his heart and soul into all he did. He loved his family dearly and was the inspiration in many creative adventures with his grandchildren. In addition to his parents, he was preceded in death by four brothers, Herbert Osborne, Rev. Roby Osborne, Rev. Farrell Osborne and Ross Osborne. Those left to cherish his memory include his loving wife of forty-five years, Rebecca Floyd Osborne; two daughters, Andrea Danner and husband Charles, Elizabethton and Amelia Osborne, Charlotte, NC; a son, Paul James Osborne Jr. and wife Amanda; three grandchildren, Alex Danner, Chloe Danner and Austin Osborne; a brother, Raymond Osborne, Unicoi and a sister, Ruth Garland and husband Joe, Johnson City. Several nieces and nephews also survive. A service to honor the life of Mr. Paul J. Osborne Sr. will be conducted at 7:00 P.M. Tuesday, April 11, 2017 in Zion Baptist Church, Elizabethton with Dr. Alan King officiating. Music will be under the direction of Zion Baptist Church. The family will receive friends at the Church from 5:00 – 7:00 P.M. on Tuesday prior to the funeral service or at the residence at other times. Graveside service and interment will be conducted at 11:00 A.M. Wednesday, April 12, 2017 in Lyons Cemetery. Active pallbearers will be selected from family and friends. Honorary pallbearers will be the Men’s Prayer Group at Zion Baptist Church. Military honors will be accorded by the Carter County Honor Guard. The family would like to express a special thank you to the Nurses on the 2600 floor of the ICU at the Johnson City Medical Center, Fresenious Dialysis Clinic in Elizabethton and to Dr. Gerry Boccarossa at the V.A. Medical Center for their loving care.

Mr. Paul J. Osborne Sr., age 70, of Hampton, TN a loving husband and father made his crossing on Saturday, April 8, 2017 in the Johnson City Medical Center. A native of Erwin, TN he was the son of the late Rev. Carl Osborne and Myrtle Brummitt... View Obituary & Service Information

The family of Paul J. Osborne Sr. created this Life Tributes page to make it easy to share your memories.