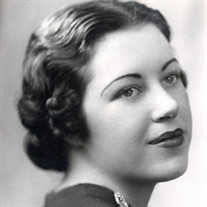 Patty Gene Denno born August 31, 1918 died Monday, October 5, 2014 in Sycamore Shoals Hospital. Her parents were Arizona and Emma Maude Linthicum and her brothers and sisters were Maurice, Martha, Mary, Kay and Max. The family originally lived in Pittsburg, Kansas. Each family member has preceded her in death. After High School graduation, Patty moved to St. Louis, MO where she trained in cosmetology and then began her lifelong career in that field. In her extracurricular activities she enjoyed a variety of needlework. In the last few years, reading became her primary enjoyment. In 1941 she married Charles Matthews and they became the parents of Michael Charles. Charlie Matthews was deceased in 1972. In 1984 Art Denno, originally of Pittsburg, Kansas became her husband. In 1999 Elizabethton, TN became their home. Art was deceased in 2008. Patty is survived by her son and daughter-in-law, Michael and Carolyn Matthews; her nieces, Marsha Krunen and Maurine Zook; her nephews, James Norwood and Jerry Linthicum and cousin, Bill Lanphier. Patty’s parents trained her in the Christian faith which by the redeeming grace of Christ her Lord she observed until her death. A follower of Jesus Christ, she was a member of Memorial Presbyterian Church. Sincere thanks are offered to Memorial Church members and Pastor Jett and wife Susan who provided abundant care and comfort in Patty’s final hours. Sycamore Shoals Hospital doctors and nurses and primary care physician, Robert Walter administered superior, professional services to Patty and her family creating an atmosphere of assurance and security. They have earned enduring, deep appreciation. Graveside service for Patty Gene Denno will be conducted at 10:45 A.M. on Friday, October 10, 2014 in Mountain Home National Cemetery with Rev. Calvin Jett officiating. Active pallbearers will be Larry Proffitt, Ramone Sanchez-Vinas, Steve Hubbard, Josh Smith, Mike Lane and Paul Morrison. Honorary pallbearers will be Bill Lanphier, John Morrison and Frank Morrison. Everyone attending the graveside service is asked to meet at Hathaway-Percy Funeral and Cremation Services at 9:45 A.M. on Friday to go in procession to the cemetery. A memorial service will be conducted at 4:30 P.M. on Wednesday, October 15, 2014 at Memorial Presbyterian, 100 East F Street, Elizabethton, TN with Rev. Calvin Jett officiating. Those who prefer memorials in lieu of flowers may make donations to Memorial Presbyterian Church, 100 East F Street, Elizabethton, TN 37643.

The family of Patty Gene Denno created this Life Tributes page to make it easy to share your memories.

Send flowers to the Denno family.