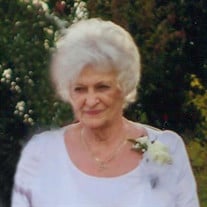 Patsy Hux Shepard, age 76, of Elizabethton, TN entered into God’s Kingdom on Tuesday, March 12, 2019. She was born August 27, 1942 in Johnson City, TN and was the daughter of the late Charles Brabson Hux and Mary Elizabeth Kelley Hux. She retired from Food Lion where she worked in the Deli Department as a cake decorator. Mrs. Shepard was a member of the Elizabethton Church of Christ. In addition to her parents, she was preceded in death by a brother, Charles Hux II and by a nephew, Joe Hux. Those left to carry on her memory include her husband, C. Lyons Shepard, of the home; two daughters and sons-in-law, Lisa and Charlie Hayes and Lee and Dennis Lyons, all of Elizabethton; grandchildren, Charlie and wife Jessica Hayes, Casey Hayes, Tasha Morrell and Matthew Shepard and two step-sons, Anthony and wife Sherry Shepard and Timmy Shepard. A service to honor the life of Patsy Hux Shepard will be conducted at 7:00 P.M. Friday, March 15, 2019 at the Elizabethton Church of Christ with Mr. Roby Ellis, Mr. Michael Klaus and Mr. Eddy Craft, ministers officiating. The family will receive friends at the church from 5:00 – 7:00 P.M. on Friday prior to the service or at her residence or the residence of her daughter, Lisa Hayes at other times. Committal and entombment service will be held at 11:00 A.M. Saturday, March 16, 2019 in the Mausoleum of Love of Sunset Memorial Park, Mountain City, TN. Active pallbearers will be Charlie Hayes, Charlie Hayes II, Casey Hayes, Dennis Lyons, Roger Shepard, Kenneth Shepard, Sherrell Shepard and George Ellis. Honorary pallbearers will be Timmy Shepard, Anthony Shepard, Matthew Shepard and very special members of her church family. Those wishing to attend the committal service are asked to meet at the cemetery at 10:50 A.M. on Saturday. The family would like to express a special thank you to the Carter County Rescue Squad.

The family of Patsy Hux Shepard created this Life Tributes page to make it easy to share your memories.

Send flowers to the Shepard family.