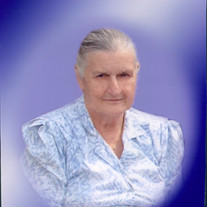 Omajean Hill Simerly, age 83, of Tiger Creek Road, Roan Mountain, went home to be with her Lord Jesus on Saturday, April 26, 2014 at her home following an extended illness. She was the daughter of the late James Edward and Sudie Mae Whitehead Hill and was born in Carter County. She was born again at thirteen years old. In addition to her parents, she was preceded in death by her husband of sixty-three years, Lydia Hall Simerly; five brothers, Leonard Hill, Sherman Hill, Arnold Hill and Bobbie Hill; Lester Hill; four sisters, Nell Barnett, Ruth Hill Clark, Lena Hill Simerly and Mary Hill. Omajean was a homemaker and loved to garden. Her Freewill Baptist Church faith was very important to her. She was a mother to all she knew and each Sunday her table was full of food for her family and extended family. No one left her home without eating. Heaven has gained and our goal is to be with her there. Mrs. Simerly is survived by three sons, Lester Simerly, Ricky Simerly and his companion Margaret Jones, Daney Simerly, all of Roan Mountain; a daughter, Joyce Carver and her husband, Steve, Jonesborough; three grandchildren, Leslie and his wife Becky; Jason and his wife, Sheila; Kenneth and his wife, Chrystal; two step-grandchildren, Jennifer Ray, Deanna Carver; six great-great grandchildren KateLynn, Hailey, Keghan, Allie, Chandler and Thomas; seven step great-great grandchildren, Lexcia, McKinze, Chloe, Kaylee, Andrew, Corey and McKenzie W.; two brothers, Elmer Hill and his wife, Edna, Roan Mountain; Bernie Hill and his wife, Faye, Hampton; two sisters, Lola Johnson and her husband, Ed, Roan Mountain; Edna Woodby and her husband, George, Jonesborough. A special friend, Bill Highsmith also survives. The funeral service for Mrs. Simerly will be conducted at 7:00 PM on Wednesday, April 30, 2014 in the Sunset Chapel of Hathaway-Percy Funeral and Cremation Services with Rev. Dallas Gregg and Rev. Randy English officiating. The family will receive friends in the funeral home chapel from 5:00 – 7:00 PM on Wednesday prior to the service. The graveside service and interment will be conducted at 11:00 am in Thursday, May 1, 2014 in the Hall Cemetery in the Tiger Creek Community. Active pallbearers will be Bill Highsmith, Jason Simerly, James Hill, Mike Simerly, Doug Blevins, Roy Simerly and Marshall Simerly. Honorary pallbearers will be Ken Woodby, Stevie Holtsclaw, Steve Carver, Leslie Simerly and her friends and neighbors. Those wishing to attend are asked to meet at the cemetery at 10:50 AM on Thursday. The family would like to express a special thank you to all who helped Mrs. Simerly including Mountain States Hospice and Mountain States Home Health Care. Those who prefer memorials in lieu of flowers may make donations to the Freewill Baptist Church Family Ministries, 90 Stanley Lane, Greeneville, TN 37743.

Omajean Hill Simerly, age 83, of Tiger Creek Road, Roan Mountain, went home to be with her Lord Jesus on Saturday, April 26, 2014 at her home following an extended illness. She was the daughter of the late James Edward and Sudie Mae Whitehead... View Obituary & Service Information

The family of Omajean Hill Simerly created this Life Tributes page to make it easy to share your memories.