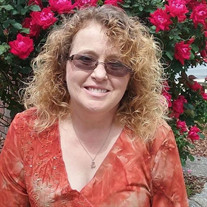 Mysee “Runt” Rose, age 48, of Elizabethton, TN passed away Sunday, October 8, 2017. A native of Burke County, NC but was raised in Carter County. She was the daughter of Robert Rose, Morganton, NC and Dorothy Banner Buckles, Elizabethton, TN. She was employed at Pizza Hut in Bristol, TN and she was also a caregiver. Mysee attended East Side Freewill Baptist Church. She enjoyed watching the Dallas Cowboys and loved taking care of her dogs. In addition to her parents, those left to cherish her memory include a son, Cody Russell and wife Ashlee, Elizabethton, TN; two sisters, Robin Taylor and husband Jerry, Elizabethton, TN and Jennifer Rose, Morganton, NC and a brother, Dean Rose and wife Pili, Gray, TN. Several nieces and nephews who she loved dearly also survive. A graveside service to honor the life of Mysee “Runt” Rose will be conducted at 2:30 P.M. Friday, October 13, 2017 in Johnson-Roanview Cemetery, Roan Mountain with Rev. Justin Deaton officiating. Active pallbearers will be selected from family and friends. The family will receive friends at Hathaway-Percy Funeral and Cremation Services, Elizabethton on Friday, October 13, 2017 from 1:00 – 2:00 P.M. prior to the graveside service. Friends may also call at the residence of her sister, Robin Taylor, 104 Cecil Van Huss Road, Elizabethton, TN at any time.

The family of Mysse "Runt" Rose created this Life Tributes page to make it easy to share your memories.

Send flowers to the Rose family.