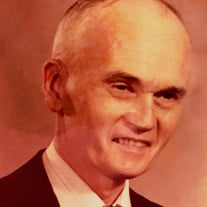 Mr. Millard Allen Fitzsimmons, Jr. age 94, of Elizabethton, TN passed away Monday, October 22, 2018 in the Cornerstone Assisted Living, Johnson City, TN. A native of Carter County, he was a son of the late Millard Fitzsimmons, Sr. and Florence Leon Large Fitzsimmons. Mr. Fitzsimmons was owner and operator of Fitzsimmons Printing in Elizabethton for seventy years. He was a member of First Christian Church of Elizabethton where he had served as an Elder and Chairman of the Board and as a teacher. He was also a member of the Elizabethton Rotary Club, the V.F.W., the American Legion, the advisory board for the Elizabethton Senior Citizens Center, the SALT Group and had served as a City Councilman. Mr. Fitzsimmons was a U.S. Army veteran serving during World War II. In addition to his parents, he was preceded in death by a brother, Charles H. Fitzsimmons I and by a brother-in-law, Hugh Hatfield. Those left to cherish his memory include his nieces, nephews, great-nieces and great-nephews, Charles H. Fitzsimmons, II and wife Charlene; Emmalena Bailey and husband Don; David Scott and wife Jennie; Nikki Rainey and husband James; Hannah Arrowood and husband Jeff; Tiffany Dunn and husband Behm; Brittany Lewis and husband Chad and Dee Benge and a sister-in-law, Mary Elizabeth Hatfield. Eleven great-great nieces and great-great-nephews also survive. A service to celebrate the life of Mr. Millard Allen Fitzsimmons, Jr. will be conducted at 2:00 P.M. Saturday, October 27, 2018 at First Christian Church of Elizabethton with Mr. John H. Smith and Mr. Michael Klaus, ministers officiating. Music will be under the direction of Gene and Carolyn Estep. The family will receive friends at the Church from 12:00 – 2:00 P.M. on Saturday prior to the service. Graveside service and interment will follow the funeral service on Saturday in Happy Valley Memorial Park. Music will be provided by Mr. Jon Shell, bagpiper. Active pallbearers will be David Scott, Jeff Arrowood, James Rainey, Behm Dunn, Chad Lewis, Don Bailey and Dr. David Mills. Honorary pallbearers will be Elders and Deacons of First Christian Church of Elizabethton, members of the Elizabethton Rotary Club, members of the American Legion, members of the V.F.W. and members of the Elizabethton Senior Citizens Center. Military honors will be accorded by the Bristol V.F.W. Honor Guard Post #6975. The family would like to express a special thank you to the staff and residents of Magnolia Crossings for their love and support. Those who prefer memorials in lieu of flowers may make donations to Cornerstone Village Benevolence Fund, 309 Princeton Road, Johnson City, TN 37601.

The family of Millard Allen Fitzsimmons Jr. created this Life Tributes page to make it easy to share your memories.

Send flowers to the Fitzsimmons family.