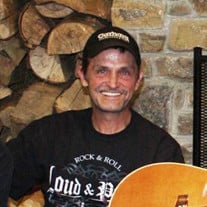 Mr. Michael Glenn Puckett, 53, of Roan Mountain, passed away peacefully into the arms of Jesus, on Monday, August 7, 2017, at the Johnson City Medical Center Hospital. Mike was born in Nuremberg, Germany and was a son of the late Glen Puckett and Rosalea Hicks (Puckett) Berry. In addition to his parents, he was preceded in death by a daughter, Kasey Nicole Puckett; his paternal grandparents, Earline Moody Puckett and Robert Puckett; his maternal grandparents, Libby Guinn Hicks and Conley Columbus Hicks and many aunts, uncles and cousins. Mike was self-employed as a painter. He was an avid fisherman and an accomplished musician who taught guitar, played and wrote his own music, including one published song, "Strong Enough". He was part of the "Steppin' Out Cloudland Community Coffee House Group", a community of musicians who met and played together. He was of the Baptist Faith. Those left to cherish the memory of Mike include two daughters, Haley Elizabeth Mize, Blountville, TN; Amanda Danielle Reed, California; two brothers, Eric Puckett (Barbara Crum), Chuckey, TN; Jim Berry (Bonnie), Blountville, TN; four sisters, Crystal Hensley (Chris), Elizabethton; Glenna King (Billy), Elk Park, NC; Jo Berry Hogan, Elizabethton; Jacki Cuevas, Columbus, GA; several special aunts and uncles, including Phyllis and Jerry Markland; Helen Hicks; Eddie and Michelle Puckett; John and Beulah Puckett; Brenda and Ralph Keen; Allen and Stephanie Puckett; Kathy Reams; Verdi Mae and Ralph Schoof. A special nephew, Drew Hensley and a special niece, Alli Hensley also survive, as well several other nieces, and many cousins. A service to honor the life of Mr. Michael Glenn Puckett will be conducted on Saturday, August 12, 2017, at 4:00 PM in the Sunset Chapel of Hathaway Percy Funeral Home with Mr. John Pierce officiating. Music will be under the direction of his special friends. The family will receive friends in the funeral home chapel from 2:00 - 4:00 PM on Saturday prior to the service, or at the home of his sister, Crystal Hensley at other times. The family will conduct a private disposition in the Hicks Family Cemetery, Elk Park, NC. The family would like to express a special and heart felt thank you to the nurses and staff of Johnson City Medical Center Hospital, ICU 2700 and Dr. Wiles, for their care and concern for Mike and the family; his special friends, Kevin and Cherrie Blevins, Rhodyjane Meadows, Marilou and Frank Johns, TV Barnett, Charlie Stout and Mildred Winters for their faithful support and to all the friends and family who reached out to pray for Mike and the family.

Mr. Michael Glenn Puckett, 53, of Roan Mountain, passed away peacefully into the arms of Jesus, on Monday, August 7, 2017, at the Johnson City Medical Center Hospital. Mike was born in Nuremberg, Germany and was a son of the late Glen Puckett... View Obituary & Service Information

The family of Michael Glenn Puckett created this Life Tributes page to make it easy to share your memories.

Send flowers to the Puckett family.