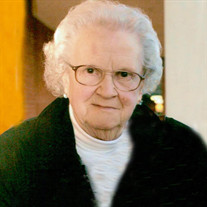 Maxine P. Greer, age 91, joined her Savior Jesus Christ and family in Heaven on Tuesday, September 22, 2015. Born in Avery County, NC she was a long time resident of Carter County, TN. Maxine was the daughter of Sam and Sally Pritchard Campbell. In addition to her parents, she was preceded in death by her husband of twenty-nine years, Orvil Greer; one brother, Paul Campbell; five sisters, Cleo Coffey, Ellen Shirley, Kathleen Miller, Lucy Johnson and Geneva Von Cannon; two sons, Frank Brooks and Randy Brooks; one granddaughter, Robin Brooks; one step-son, Frankie Greer and two step-granddaughters, Layla Rodgers and Wendy Masengale. Maxine retired from F.W. Woolworth’s in Johnson City, TN after thirty-five years of service, where she was known simply as “Mitchell”. She was a strong and joyful woman, with many a tale to tell! She faithfully attended First Freewill Baptist Church in Elizabethton, TN where she was a proud member of the Volunteer Sunday School Class. Among the many left to cherish her memory include one son, Dr. Michael Brooks and wife Diane, Helena, AL; daughters, Lois Perry, Elizabethton, Brenda Wilson and husband Paul, Piney Flats, Jean Houston and husband Jerry, Elk Park, NC, Norma Johnson and husband Darty, Elizabethton; step-sons, Dean Greer and wife Brenda, Gene Greer and wife Shelby; step-daughters, Lynn Bowman and husband Bob, Tracy Greer, Lisa Cradic and husband Bryan; eighteen grandchildren; twenty-six great-grandchildren and fourteen great-great-grandchildren, nine step-grandchildren and six step-great-grandchildren and many beloved extended family members. Special nieces and nephews also survive along with a very special friend, Sue Webb. A service to honor the life of Maxine P. Greer will be conducted at 7:00 P.M. Thursday, September 24, 2015 in the Sunset Chapel of Hathaway-Percy Funeral and Cremation Services with Rev. Nathan Jennings and Rev. Jack Lloyd officiating. Music will be under the direction of Jared Erwin, a great-grandson. The family will receive friends at the funeral home from 5:30 – 7:00 P.M. on Thursday prior to the funeral service. Graveside service and interment will be conducted at 10:00 A.M. Friday, September 25, 2015 in the Johnson-Roanview Cemetery. Active pallbearers will be grandsons. Everyone will meet at the cemetery at 9:50 A.M. on Friday for the service. The family would like to express a special thank you to the nurses and staff of the 7400 Floor of the Johnson City Medical Center for their care to Maxine. In lieu of flowers the family requests that memorial contributions be made to The Monthly Meal Ministry of First Freewill Baptist Church, 706 First Street, Elizabethton, TN 37643 or Samaritan’s Purse, P. O. Box 3000, Boone, NC 28607.

The family of Maxine P. Greer created this Life Tributes page to make it easy to share your memories.

Send flowers to the Greer family.