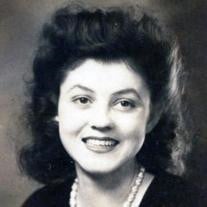 Mrs. Mary Jane Bateman, age 89, 1400 Bristol Highway, Elizabethton, TN passed away Friday, January 18, 2013 in Life Care Center of Gray following an extended illness. A native of Carter County, she was the daughter of the late Ralph and Martha Beulah Liner Freeman. Mrs. Bateman worked for over forty years at Bemberg Corporation and for ten years at Texas Instruments in Johnson City from where she retired. She was a member of Borderview Christian Church. In addition to her parents, she was preceded in death by her husband, George Martin Bateman in 1990; a sister, Irene Elliott and a brother, Sam Freeman. Survivors include a son, Randy Bateman, of the home; five brothers, Wayne Freeman and wife Tonya, Elizabethton, Ralph Freeman Jr. and wife Nadine, Chattanooga, TN, J.W. Freeman and wife Lois, San Diego, CA, Patrick Freeman and wife Georgia, Johnson City and Cecil Freeman and wife Jean, Elizabethton and one sister, Betty Greer, North Augusta, SC. Several nieces and nephews also survive. Funeral service for Mrs. Mary Jane Bateman will be conducted at 6:00 P.M. Monday, January 21, 2013 in the Sunset Chapel of Hathaway-Percy Funeral and Cremation Services with Mr. Gerald Holly and Mr. Kirk Langston, ministers officiating. Music will be under the direction of Mr. Scott Reynolds. The family will receive friends at the funeral home from 5:00 – 6:00 P.M. on Monday prior to the funeral service. Graveside service and interment will be conducted at 11:00 A.M. Tuesday, January 22, 2013 in Happy Valley Memorial Park. Everyone attending the graveside service is asked to meet at the cemetery at 10:50 A.M. on Tuesday.

The family of Mary Jane Bateman created this Life Tributes page to make it easy to share your memories.

Send flowers to the Bateman family.