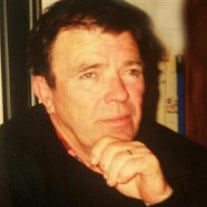 Mr. Manuel Price, age 73, of Elizabethton, TN passed away Tuesday, October 13, 2015. A native of Carter County, he was the son of the late Herman and Hattie Edens Price. Mr. Price retired from the pipe fitting industry and was a member of the Plumbing and Pipe Fitters Local Union #538 for twenty-six years. He was also a member of East Watauga Baptist Church. Mr. Price loved to spend time with his grandchildren and loved the outdoors. In addition to his parents, he was preceded in death by his wife, Sharon A. Keller Price; two daughters, Melissa Stanley and Angela Price and a sister, Shirley Morgan. Survivors include two sons, Herman D. Price and Michael A. Price and wife Kathy, all of Elizabethton; a son-in-law, Gerald Stanley, Nashville, TN; nine grandchildren; six great-grandchildren; four brothers, Louie Price, Tony Price, Jerry Price and Larry Price; all of Elizabethton and two sisters, Sue Blythe and Lisa Padgett, both of Elizabethton. Several nieces and nephews also survive. A service to honor the life of Mr. Manuel Price will be conducted at 7:00 P.M. Friday, October 16, 2015 in the Sunset Chapel of Hathaway-Percy Funeral and Cremation Services with Rev. Richard Blankenship and Rev. Mike Dickenson officiating. The family will receive friends at the funeral home from 5:00 – 7:00 P.M. on Friday prior to the funeral service or at the residence of any of the family at other times. Graveside service and interment will be conducted at 11:00 A.M. Saturday, October 17, 2015 in the Treadway Cemetery. Active pallbearers will be grandsons, Michael Price, Brooks Price, Brett Price, Dakota Price and Joseph Stanley. Honorary pallbearer will be a grandson, Dexter Price. Everyone will meet at the funeral home at 10:15 A.M. on Saturday to go in procession to the cemetery. Those who prefer memorials in lieu of flowers may make donations to the Memorial and Honor Program, St. Jude Children’s Research Hospital, 501 St. Jude Place, Memphis, TN 38105-1942.

Mr. Manuel Price, age 73, of Elizabethton, TN passed away Tuesday, October 13, 2015. A native of Carter County, he was the son of the late Herman and Hattie Edens Price. Mr. Price retired from the pipe fitting industry and was a member of... View Obituary & Service Information

The family of Manuel Price created this Life Tributes page to make it easy to share your memories.