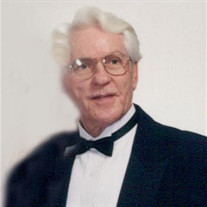 Mr. M. Paul Knapp, minister, age 94, of Elizabethton, TN was called home to be with his Lord and Savior on Monday, November 26, 2018. He was born in Alton, IL the son of the late Charles and Alice Knapp. Mr. Knapp joined the Marines at the age of seventeen. He was a Line Sergeant of a machine gun squad and served in Bougainville, was wounded by shrapnel on Guam and had a gunshot wound to the chest on Okinawa. He was discharged in 1945. The family moved to Chicago to join two older brothers. He joined the Englewood Christian Church a year later. He along with two friends were called to the ministry in 1949: Leo Ernst, to be a song leader and youth director and Al Zimmerman to be a missionary to South Africa. Their minister suggested that they go to Milligan College and all three graduated in 1953. Later, Mr. Knapp earned his Master’s Degree in Education and began teaching at Hampton High School. He taught there for thirty-four years. Mr. Knapp also ministered to Wood Howell Christian Church in Virginia, Southside Christian Church in Elizabethton and Limestone Cove Christian Church in Unicoi. He met his wife of sixty years at Doe River Baptist Church on a blind date. They were married in 1951 by Arthur Fineout. In addition to his parents, he was preceded in death by his wife, Leona Fineout Knapp in 2011; three brothers; Russel Knapp, Ivan Knapp and Ray Knapp and a sister, Ruth Knapp. Those left to cherish his memory include a daughter, Deborah Starr Knapp, Elizabethton and a son, David Paul Knapp and wife Marjorie, Gray; three grandchildren, Erika Nicole Hale and husband Brad, Brayden Alexander Knapp and Deborah Anne Knapp, all of Gray; a great-grandson, Colin Hale and two great-granddaughters, Danika Hale and Emilia Hale. One sister, Roberta Hayes, Montica, CA and several nieces and nephews also survives. Committal and entombment service for Mr. M. Paul Knapp, minister will be conducted 11:00 A.M. Friday, November 30, 2018 in the Mausoleum of Peace of Happy Valley Memorial Park with Mr. Michael Klaus, minister officiating. Music will be under the direction of Mr. Scott Reynolds. Military honors will be accorded by the Carter County Honor Guard. Active pallbearers will be members of the Men’s Class of First Christian Church, Elizabethton. Those attending are asked to meet at the cemetery at 10:50 A.M. on Friday for the committal service.

Mr. M. Paul Knapp, minister, age 94, of Elizabethton, TN was called home to be with his Lord and Savior on Monday, November 26, 2018. He was born in Alton, IL the son of the late Charles and Alice Knapp. Mr. Knapp joined the Marines at the... View Obituary & Service Information

The family of M. Paul Knapp, Minister created this Life Tributes page to make it easy to share your memories.

Send flowers to the Knapp, family.