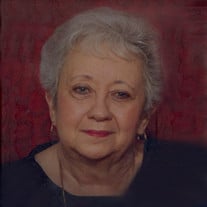 Mrs. Linda Kay Garrison, 70, of Elizabethton, passed away on Friday, January 2, 2015 at her home following an extended illness. She was the daughter of the late Roy Eugene and Juanita Buck Davis and was born in Carter County. In addition to her parents, she was preceded in death by a brother, Gerald Davis. Mrs. Garrison was a loving wife, mother, grandmother and great-grandmother who loved to work in her flower garden, travel and go antiquing. She was a very active member of Beck Mountain Baptist Church. She was retired from the Johnson City Medical Center Hospital where she worked for thirty-four years as a patient account representative. She is survived by her husband, Jack W. Garrison, of the home; two sons, Mark A. Garrison and his wife, Norma, Elizabethton, Jeff Garrison, Elizabethton; a daughter, Tina Miller and her husband, Mark, Hampton; six grandchildren, Jacob Garrison, Kaylee Garrison, Olivia Garrison, Kalyn Garrison, John Mark Miller and his wife, Jessica and Dustin Miller and his fiancee, Shelby; three great-grandchildren, Lexie Miller, Torie Miller and Matthew Miller. A service to honor the life of Mrs. Garrison will be conducted at 7:00 PM on Monday, January 5, 2015 in the Sunset Chapel of Hathaway-Percy Funeral and Cremation Services with Rev. Ronnie Campbell officiating. Music will be under the direction of Greg Odom and Anna Hurley. The family will receive friends in the funeral home chapel from 5:00 – 7:00 PM on Monday prior to the service or at the home anytime. The graveside service and interment will be conducted on Tuesday, January 6, 2015 at 10:00 AM in the Happy Valley Memorial Park. Active pallbearers will be Jacob Garrison, Mark Miller, John Miller, Dustin Miller with others to be selected from family and friends. Honorary pallbearers will be Phil Nave, Doyle Hendrix, Jerry Bowers, Terry Garrison, Danny Garrison, David Smith and Dwayne Calhoun. Those wishing to attend are asked to meet the family at the funeral home at 9:15 AM on Tuesday to go in procession to the cemetery. Those who prefer memorials in lieu of flowers may make donations to Beck Mountain Baptist Church, P. O. Box 254, Hampton, TN 37658.

Mrs. Linda Kay Garrison, 70, of Elizabethton, passed away on Friday, January 2, 2015 at her home following an extended illness. She was the daughter of the late Roy Eugene and Juanita Buck Davis and was born in Carter County. In addition to... View Obituary & Service Information

The family of Linda Kay Garrison created this Life Tributes page to make it easy to share your memories.

Mrs. Linda Kay Garrison, 70, of Elizabethton, passed away on...

Send flowers to the Garrison family.