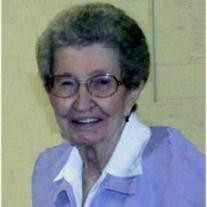 Mrs. Laura “RL” Brewer, age 85, of Elizabethton, passed away Thursday, November 15, 2012 in the Johnson City Medical Center following an extended illness. She was a native of Carter County and was the daughter of the late Cash Ingram and Pearl Whitehead Ingram Townsend. Mrs. Brewer had lived in Carter County her entire life and was a member of Biltmore Baptist Church. She was also a member of the Order of the Eastern Star, Butler #218. In addition to her parents, she was preceded in death by four brothers, Virl Ingram, Jack Ingram, Earl Ingram and Jerry Townsend; two sisters, Georgia Ingram and Alice Cole and her step-father, Grant Townsend. Survivors include her husband of sixty-four years, Lester Brewer, of the home; two sons and daughters-in-law, Johnny and Shawana Brewer, Knoxville and Gary and Marianna Brewer, Hampton; four grandchildren and their spouses, Mark and Pennye Brewer, Knoxville, Eric and Deborah Brewer, Maryville, Michelle and James Johnson, Hampton and Darrin and Shanon Brewer, Jonesborough; six great-grandchildren, Matt, Emily, MaCayla, Seth, Bailey and Laken. Several nieces, nephews and cousins, four sisters-in-law, Mary Lou, Aline, Linda and Mae and special friends, Hazel, Deana Jo, Kathleen, Jo Anna, Dare, Gladys and Barbara also survive. Funeral service for Mrs. Laura “RL” Brewer will be conducted at 7:00 P.M. Saturday, November 17, 2012 in the Sunset Chapel of Hathaway-Percy Funeral and Cremation Services with Pastor Mark Grubb and Pastor Bill Davis officiating. The family will receive friends at the funeral home from 5:00 – 7:00 P.M. on Saturday prior to the funeral service or at the residence at other times. Graveside service and interment will be conducted at 2:00 P.M. Sunday, November 18, 2012 in Lacey Cemetery, Roan Mountain. Active pallbearers will be selected from the family. Honorary pallbearers will be the men at Biltmore Baptist Church and members of Mrs. Brewer’s Sunday School Class. Everyone will meet at the cemetery at 1:55 P.M. on Sunday for the graveside service. Those who prefer memorials in lieu of flowers may make donations to the Building Fund, Biltmore Baptist Church, 1181 Bristol Highway, Elizabethton, TN 37643.

Mrs. Laura “RL” Brewer, age 85, of Elizabethton, passed away Thursday, November 15, 2012 in the Johnson City Medical Center following an extended illness. She was a native of Carter County and was the daughter of the late Cash Ingram and Pearl... View Obituary & Service Information

The family of Laura "RL" Brewer created this Life Tributes page to make it easy to share your memories.

Send flowers to the Brewer family.