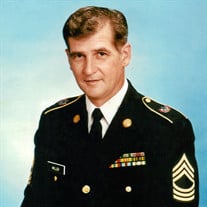 MSG Larry Vance Miller, US Army Retired, age 75, of Hampton passed away at his residence on Sunday, September 29, 2019. He was the son of the late Ples W. and Vonnie McKinney Miller. In addition to his parents, he was preceded in death by a brother, Terry Miller. Mr. Miller was a veteran of the US Army serving in Vietnam. He was stationed in many places in the United States as well as Germany and Korea. He attended the Seventh Day Adventist Church in Roan Mountain and enjoyed studying the Word Of God and was known as a master woodworker. Those left to cherish his memory include his wife of 38 years, Nancy Street Miller of the home; four children, Sherryn Hubbard and husband Glen of Londonderry, NH; Kenneth Poole of Hickory, NC; Kisa McMillan and husband Erik of Hickory, NC and Kimberly Haddock and husband Chris of Fayetteville, NC.; five grandchildren, Kyle Hubbard of Londonderry, NH; Tyler McMillan and Brandon McMillan of Hickory, NC; Kelsey Haddock and Cirra Haddock of Fayetteville NC; a sister, Gale Lowe and husband Jeff of Elizabethton and a niece, Misty Miller of Johnson City. A service to honor the life of Mr. Miller will be conducted at 7:00 pm on Wednesday, October 2, 2019 in the Sunset Chapel of Hathaway Percy Funeral Home with Elder Eldon Ryder and Pastor Mike Mnich officiating. The family will receive friends prior to the service from 5:30 – 7:00 pm or at the residence at other times. Graveside service and interment will be conducted at 10:45 am on Thursday, October 3, 2019 at the Mountain Home National Cemetery in Johnson City, TN. Military Honors will be accorded by the Carter County Honor Guard. Honorary pallbearers will be Jeff Lowe, Harold Presnell, David Maples and Kenneth Sheets. Those wishing to attend the graveside service are asked to meet at the cemetery at 10:35 am on Thursday. Those who prefer memorials in lieu of flowers are asked to make donations to DAV – Disabled American Veterans, P. O. Box 14301, Cincinnati, OH 45250-0301.

MSG Larry Vance Miller, US Army Retired, age 75, of Hampton passed away at his residence on Sunday, September 29, 2019. He was the son of the late Ples W. and Vonnie McKinney Miller. In addition to his parents, he was preceded in death by a... View Obituary & Service Information

The family of Larry Vance Miller created this Life Tributes page to make it easy to share your memories.

Send flowers to the Miller family.