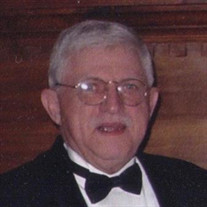 Kenneth Wayne “Cotton” Heaton, age 69, of Hampton left this earth to be with the Lord on Tuesday, July 24, 2018. He was born on October 31, 1948 and was the son of the late Howard and Alice Montgomery Heaton. He was also preceded in death by a sister, Peggy Sue Taylor. He was a loving husband and father and is survived by his wife of forty-nine years, Karen Carden Heaton and three children, Kimberly Heaton of Jonesborough, Kara Heaton of Hampton and Kevin Heaton and wife Debra and a grandson, Lucas Heaton of Clinton, TN. Two sisters, Carol McClain of Hampton and Betty James of Elizabethton and several nieces and nephews also survive. “Cotton” was a 1966 graduate of Hampton High School and was employed for thirty-five years as a Senior Project Manager for Gerdau AmeriSteele of Knoxville, TN which provided engineering and oversite for steel reinforcement projects. He was Senior Project Manager for such projects as the Tennessee/Kentucky Cumberland Gap Tunnels, Army Corp of Engineer project for the Paducah, Kentucky Lock and Dam, the Blue Cross/Blue Shield building in Chattanooga, TN, the underground security tunnels at Dulles Airport, VA and the Memphis Arena. He was a twenty year member of the Hampton Volunteer Fire Department (HVFD). As a former Chief of the HVFD he was part of the group that worked to relocate the HVFD to the current location and building the HVFD is in today. He was a former Scout Leader for the Boy Scout Troop 61 which was sponsored by the Hampton Christian Church. He was a member of First Baptist Church of Elizabethton. “Cotton” enjoyed riding his Harley Davidson motorcycle, collecting model railroad trains and spending time with his family especially his grandson, Lucas and also with his faithful beagle, Molly. A service to honor the life of Kenneth Wayne “Cotton” Heaton will be conducted at 2:00 P.M. Saturday, July 28, 2018 in the Sunset Chapel of Hathaway-Percy Funeral and Cremation Services with Dr. Angus Shaw officiating. The family will receive friends at the funeral home from 12:30 P.M. until 2:00 P.M. on Saturday prior to the service or at the residence at other times. Interment will follow the funeral service in Happy Valley Memorial Park. Active pallbearers will be Lucas Heaton, Walter Heaton, Dan Helton, Shannon Cardwell, Barney Brown, Richard Isaac and Dayton Jones. Honorary pallbearers will be Lloyd Flinchum, Ray Breeding, Charlie Weaver, Jimmy Reed, John Forsythe and Ed Deloach. Those who prefer memorials in lieu of flowers may make donations to the Hampton Volunteer Fire Department, P. O. Box 191, Hampton, TN 37658.

The family of Kenneth Wayne Heaton created this Life Tributes page to make it easy to share your memories.

Send flowers to the Heaton family.