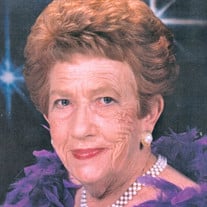 “The tide recedes but leaves behind bright seashells on the sand. The sun goes down but gentle warmth still lingers on the land. The music stops and yet it echoes on in sweet refrains. For every joy that passes, something beautiful remains.” Katherine Louise Lovelace Edens, age 87, of Elizabethton passed away peacefully with her family by her side on June 2, 2014 at Sycamore Shoals Hospital. A native of Carter County, she was the daughter of the late Herman and Allie Ellis Lovelace. She had worked at Montgomery Ward in Elizabethton, Walmart and retired from Super X Drugs. She was of the Christian faith and a member of East Side Baptist Church. She loved shopping, walking, playing cards and traveling. In addition to her parents, she was preceded in death by her husband, John Burley Edens; her son, Charles Edward Edens; a step-son, John Burley (Buddy) Edens; a step-daughter, Sudie Edens Buckles; her brothers, Reynolds, Charles and Clyde Lovelace; a sister, Mary Lovelace Carver and a son-in-law, John A. Ramsey III. Survivors include her daughters and sons-in-law, Kathy and Jim Cox, Elizabethton and Brenda and Jim Morrell, Nashville; her grandson, Michael Morrell; other grandchildren, Johnny Edens, Betsy Edens Cline, Patricia Buckles Martin, Clark Buckles, Tracey Buckles, Chad Richardson and Lori Richardson; one sister, Betty Randolph, Windermere, FL and a daughter-in-law, Helen Edens. Several nieces and nephews, Jennifer Grady, Judy Moon, Nancy Scott, Gloria Lovelace and Ted Lovelace and a very special friend, Jessica Gryder also survive. A very special thank you goes to Life Care of Elizabethton for her care. Graveside service for Katherine Louise Lovelace Edens will be conducted at 1:00 P.M. on Friday, June 6, 2014 in Happy Valley Memorial Park with Rev. Jeremy Rhoton officiating. Everyone wishing to attend the service will meet at the cemetery at 12:50 P.M. on Friday. In lieu of flowers, memorial donations may be made to the Alzheimer’s Association, 207 N. Boone Street, #25, Johnson City, TN 37604.

&#8220;The tide recedes but leaves behind bright seashells on the sand. The sun goes down but gentle warmth still lingers on the land. The music stops and yet it echoes on in sweet refrains. For every joy that passes, something beautiful... View Obituary & Service Information

The family of Katherine Louise Lovelace Edens created this Life Tributes page to make it easy to share your memories.

“The tide recedes but leaves behind bright seashells on the sand....

Send flowers to the Edens family.