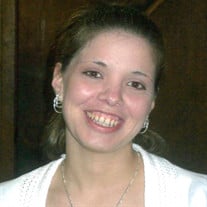 Julie Elizabeth Braswell, age 36, of Elizabethton, TN passed away Tuesday, November 7, 2017 in Sycamore Shoals Hospital. A native of Elizabethton, TN she was the daughter of Richard and Jean Woodward Houghton, Elizabethton. She had worked on the assembly line at A. O. Smith American Water Heaters, Johnson City. Julie was a member of Unaka Baptist Church. She loved spending time with her children and her family. In addition to her parents, those left to cherish her memory include her husband, Richard Braswell, of the home; a daughter Tori Rowe, of the home; a son, Tegan Braswell, of the home; a sister, Jennifer Houghton, Elizabethton; a brother, Richie Houghton and wife Kristy, Elizabethton; paternal grandparents, Leonard and Betty Houghton, Elizabethton and maternal grandparents, Joan and Bud Greene, New York. Special nieces and nephews also survive. A service to honor the life of Julie Elizabeth Braswell will be conducted at 4:00 P.M. Sunday, November 12, 2017 in the Sunset Chapel of Hathaway-Percy Funeral and Cremation Services with Rev. Stephen Greene officiating. Music will be under the direction of Sheila Nidiffer, soloist. The family will receive friends in the funeral home chapel from 2:00 – 4:00 P.M. on Sunday prior to the service, or at the home of her mother and father at other times. The graveside service and interment will be conducted on Monday, November 13, 2017, at 11:00 A.M. in the Wilson Cemetery. Active pallbearers will be Richie Houghton, Jacob Houghton, Justin Houghton, Jared Houghton, Brian Houghton, Paul Braswell Jr. and Jason Cooper. Those wishing to attend the graveside service are asked to meet the family at the cemetery at 10:50 A.M. Monday. Those who prefer memorials in lieu of flowers may make donations to the Unaka Baptist Church Building Fund, 1598 Highway 91, Elizabethton, TN 37643.

The family of Julie Elizabeth Braswell created this Life Tributes page to make it easy to share your memories.

Send flowers to the Braswell family.