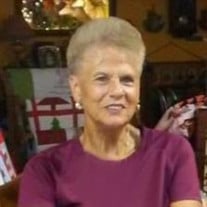 Judith (Jude) Prince Gilbert, age 73, passed unexpectedly to be with our Lord on May 23, 2020. Jude was born July 7th, 1946 in Portland, Maine and grew up in Westbrook, Maine where she graduated from Westbrook High School in 1965. She also attended the University of Maine and the Portland School of Fine Arts in 1966/67. She married Duane L. Gilbert, Sr. of North Anson, Maine on July 3rd, 1966. After living in Scarborough and Gray, Maine; she and Duane built their beautiful dream log home into the side of a mountain in Rumford Point, Maine in 1977. This is where, in addition to art, her love of gardening and stonework began. Jude was an amazing artist; her medium of choice was oils. She was drawn to painting sailors, ships, horses and ducks. Her Victorian ceramic Santa’s adorned our mantels every Christmas. Her love of animals was extremely well known and Jude was the Supreme Animal Trainer in the family. In her younger years, she raised and showed her prized 17 ½ hand Palomino Stallion named Chiefy throughout New England. From 1962 to 1966 Jude and Chiefy held the New England Championship for Saddle Class and Parade Class for those 4 years. Interesting note: Chiefy had a companion named Dexter (1/2 Morgan, ½ Quarter-horse); Chiefy would not load in the trailer until she loaded Dexter first; so, she had to load both horses for each show and put Dexter in a stall during the competition. Jude also taught herself to pay classical guitar; she had an amazing voice and loved to sing and play timeless songs by Joan Baez and The Carpenters. Jude was President of the Doberman Rescue League in Maine for 10 years and President of the BMW Club as well in Maine. In 2004, Jude and Duane made the big move to a state and town they both loved, Elizabethton, Tennessee. Jude's first order of business was to beautify their new home and build the most amazing stone, rock and brick gardens, while Duane was completely remodeling the house itself. At the same time they trapped, spayed/neutered/released 29 cats while keeping another 7 as pets because they were too friendly to survive in the wild. This all occurred during their first 5 years in Tennessee. After this Jude went to work for the first time outside of the home at Lowe’s and remained employed for the next 8 years. For Jude, one of her greatest accomplishments was becoming a Master Gardener. Jude met many of her best friends through plants; she truly enjoyed designing gardens and gardening. In her capacity as Master Gardener, she maintained gardens at Sycamore Shoals, Tipton Hayes, and Johnson City Medical Center. She also designed, built and maintained the flower garden at the front of Brick Christian Church. Jude is survived by her husband of 54 years, Duane L. Gilbert, Sr. CMfgE of Elizabethton, TN; her daughter and son-in-law, Dr. Kimberly Farr and Dr. Dominic DePatsy of Falmouth, ME; her son Duane L. Gilbert Jr. of Silicon Valley, CA. Jude is also survived by 7 grandchildren; Logan Gilbert of Boston, MA; Hayden Farr, Mason Farr, Nikko DePatsy, Luka DePatsy and Rocco Depatsy from Falmouth, ME; Allison Farr of Boston, MA; sister-in-law Darla Gilbert Pickett of Skowhegan, ME; niece Trisha Austin and her husband Harvey Austin of Skowhegan, ME. Judith is predeceased by her parents, Alfred S. Prince and Margaret H. Prince of Westbrook, ME. A CELEBRATION OF LIFE is being planned at JUDE’S HOME GARDENS on July, 25, 2020.

Judith (Jude) Prince Gilbert, age 73, passed unexpectedly to be with our Lord on May 23, 2020. Jude was born July 7th, 1946 in Portland, Maine and grew up in Westbrook, Maine where she graduated from Westbrook High School in 1965. She also attended... View Obituary & Service Information

The family of Judith Prince Gilbert created this Life Tributes page to make it easy to share your memories.

Send flowers to the Gilbert family.