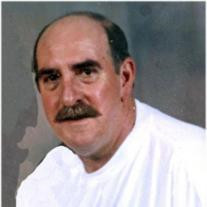 Johnny Blaine Simerly, age 69, 722 Woodland Drive, Elizabethton, TN passed away Monday, December 3, 2012 at Sycamore Shoals Hospital. A native of Carter County, he was the son of the late Earl Samuel and Mary Alice Lyons Simerly. He was a... View Obituary & Service Information

The family of Johnny Blaine Simerly created this Life Tributes page to make it easy to share your memories.