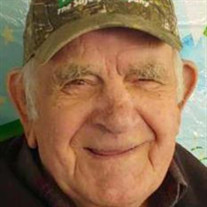 John Henry Shepherd, age 89, of Watauga, TN went to be with the ones that he loved and missed for so long on Wednesday, December 15, 2021, at his daughter Debra Taylor’s residence in Telford TN. He was born in Carter County, TN to the late Anderson and Rosa Bell Shepherd. John retired from Burlington Industries and was an avid Farmer. He was a simple man who loved working with his bees, hunting, fishing and more importantly his family. John enjoyed making honey and ginseng hunting. He was a member of New Hope Missionary Baptist Church. In addition to his parents, he was preceded in death by his second wife Betty, two grandchildren, one great grandchild and two brothers, Joe and Robert; three sisters, Edith, Louise and Dortha; two uncles, Hacker and Benick; two aunts, Susan and Irene. Those left to cherish his memory include his first wife and still friend, Wanda Constable; one son-Ricky; four daughters-Debra, Thelma, Tammy, and Mary; four grandchildren-Anthony, Montana, Jonathon, and Matthew; four great-grandchildren-Liberty, Gage, Trinity, Lil John, and Justice; three great great grandchildren Jackson, Harper, and Bentley. His older sister Ethel Coleman is the last remaining of the Shepherd clan (age 95). As well as two stepdaughters; five step-grandchildren; three step-great-grandchildren…Serenity, Zada and Xavier aka X-ray; his best friend in the world, Ann Davis and two best buds-Larry Brown and Howard Rumley. He loved and adored all his many nieces, nephews, cousins, and in-laws-especially his Son’s-in-Law, Mark, David, Donny, Floyd and his Daughter-in-law, Robin. A graveside service to honor the life of John Henry Shepherd will be conducted at 1:00 P.M. on Sunday, December 19, 2021, in the New Hope Missionary Cemetery, 1177 Fairview School Road Blountville, TN with Pastor Dewayne Locklear officiating. Pallbearers are Roger Shepherd, Donny Hamilton, David Taylor Mark Simmons, Bobby Garland, and Larry Brown. Those who wish to attend the graveside service are asked to meet at the cemetery at 12:45 P.M. on Sunday. The family would like to give a special thanks to friends and family for all their love and support during this difficult time. John was a simple man not needing or wanting much to memorialize his passing. Family is asking in lieu of worldly possessions that donations toward funeral expenses be considered at Hathaway-Percy Funeral Home as love felt offerings. Prayers are needed above all. Online Condolences may be shared with the family and viewed on our website at www.hathawaypercy.com. Hathaway-Percy Funeral and Cremation Services are honored to serve the Shepherd family. Office: 423-543-5544

John Henry Shepherd, age 89, of Watauga, TN went to be with the ones that he loved and missed for so long on Wednesday, December 15, 2021, at his daughter Debra Taylor&#8217;s residence in Telford TN. He was born in Carter County, TN to the... View Obituary & Service Information

The family of John Henry Shepherd created this Life Tributes page to make it easy to share your memories.

Send flowers to the Shepherd family.