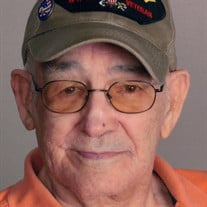 John Riddle, Jr, age 96, of Watauga, TN passed away Saturday, January 22, 2022 at The Waters of Johnson City. He was born in Linville, NC to the late John Riddle, Sr and Mary Etta Greer Riddle. He was a WWII Veteran having joined the Navy at age 17. He served as a hard hat diver/under water welder on a floating dock in the South Pacific and also on a light aircraft carrier named San Jacinto. John was a 32nd degree mason of Watauga Masonic Lodge #622 for over 70 years and a member of the brotherhood of Electrical Workers #934 for 75 years and during that time he worked as the business manager for IBEW for 13 years. He later retired from TVA. John enjoyed swimming, skiing, woodworking and was an avid UT fan. He attended school at Duffield Academy, T.A. Dugger, Jr. High and Elizabethton High, where he played football. John was an active member and deacon of Brick Christian Church, where he raised his family in for many years. He was a charter member at Range Community Christian Church, where he worked every day to help construct their building. John was most recently an active member and deacon at First Christian Church, Elizabethton until he was no longer physically able to attend. In addition to his parents he was preceded in death by his first wife, Elva J. Riddle; special step-father, T.J. Chafin; five sisters and two brothers. Those left to cherish his memory are his wife, Brenda G. Riddle, of the home; daughter, Linda Jay Johnson and husband Bradley, of Watauga; two sons, David Riddle and wife Tonya, of Roan Mountain and Rick Riddle and wife Vickie, of Johnson City; two step-sons, Jeremy Oliver and wife April and Jonathan Oliver, of Elizabethton; granddaughter, Mary Ann Hill and husband Abraham; four grandsons, Bradley Scott Johnson and wife Jennifer, of Bluffton, SC, Patrick Sean Johnson and wife Angela, of Elizabethton, TN, James David Riddle, of Denham Springs, LA, Christian Michael Riddle, of Elizabethton and Matt Sparks and wife Erin, of Jonesborough; two granddaughters, Brandee Lynne Riddle, of Elizabethton and Sara Lin Johnson, of Watauga; great-grandsons, William Johnson, of Bluffton, SC, McKinlay Scott Johnson and wife Tiffany, of Bluffton, SC, Jack Riddle, of Denham Springs, LA, Jackson Robbins, of Elizabethton and Tegan Sparks, of Jonesborough; great-granddaughters, Jayla Madison Wandell, Mollie Johnson and Maggie Johnson, all of Elizabethton and several nieces and nephews also survive. A service to honor the life of John Riddle, Jr will be held at 12:30 P.M. on Monday, January 31, 2022 in the Sunset Chapel of Hathaway-Percy Funeral Home with Mr. Jeff Campbell, Minister officiating. The music will be under the direction by Ardith Sheffield. The family will receive friends between the hours of 11:30 A.M. and 12:30 P.M. prior to the service on Monday. The graveside service and committal will follow in the Mountain Home National Cemetery, Mountain Home, TN. Pallbearers will be selected from his grandsons. Military Honors to be accorded at the graveside. Honorary pallbearers are his granddaughters, First Christian Church and members of the Range Community Christian Church. Those who prefer memorials in lieu of flowers may make donations to Salvation Army, 1420 E. Main Street, Johnson City, TN 37601 or to Shriners Hospitals for Children, Attn: Office of Development 2900 N. Rocky Point Dr.Tampa, FL 33607. The family would like to give a special thanks to all the Hospice staff and caregivers for all their loving care and support during this difficult time. Online condolences may be shared with the family and viewed on our website at www.hathawaypercy.com. Hathaway-Percy Funeral and Cremation Services are honored to serve the Riddle Family. Office: 423-543-5544

John Riddle, Jr, age 96, of Watauga, TN passed away Saturday, January 22, 2022 at The Waters of Johnson City. He was born in Linville, NC to the late John Riddle, Sr and Mary Etta Greer Riddle. He was a WWII Veteran having joined the Navy at... View Obituary & Service Information

The family of John Riddle Jr created this Life Tributes page to make it easy to share your memories.

Send flowers to the Riddle family.