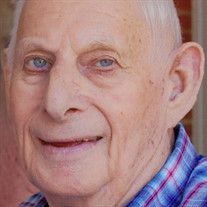 He who was seated on the throne said, " I am making everything new!" Then he said, "Write this down, for these words are trustworthy and true." Revelation 21:5 After 81 years of life on this earth, our brother, uncle, cousin and friend is rejoicing in the present and marvelous reality of this newness promised so long ago. Those who knew him can't help but feel sad that he's gone. You would too if you were lucky enough to be counted as his friend. But we're celebrating through the sadness because, after years of physical pain which he only rarely talked about or even hinted at, John finally is free! Through that physical pain, he was a steadfast light to us all. He was full of love, generosity and acceptance for everyone no matter what. John treated all he met with honor and respect, holding no preference or prejudice. Though he had little on this earth by way of possessions or professional achievements, his was a life supremely well-lived because his was a life wholly devoted to loving and caring for others. Born in the fall of 1939 in Laurel Bloomery, Tennessee, John Charles Morrison was a farm boy from the start. The son of Charles and Gladys Morrison, he joined his two brothers and three sisters in the hard work that comes with growing up surrounded by tobacco fields, hay bales and cattle. After high school, John moved to North Carolina to work and earn money and enjoy life on his own. But soon, he realized his parents needed him. So John dropped everything, moved back home, and devoted the next several decades of his life to being a farmer and a caregiver to the parents he loved. In doing this, he gave the gift of freedom to his siblings and their families, and they forever will be grateful. John's favorite topic of discussion was you. The seemingly trivial details of your life were of great interest to him. No matter what, he rooted you on. And the pride of his life was his family. If he owned it, you could have it. He gave until it hurt, and he did it without regret. In leaving us on May 20th, John was reunited with his parents and his beloved sister and "partner in crime" Shirley (Morrison) Loggins. He's survived by his big sister and primary caregiver Carolyn (Morrison) Matthews, his baby sister Sue (Morrison) Smith, his brothers Paul Morrison and Frank Morrison as well as his siblings' spouses, children, and grandchildren. John's family would like to thank all those who helped care for him, especially the staff at Ivy Hall Nursing Home where he happily spent the last few years surrounded by friends and constant comfort. In John's final hours, he told his family, "I'm happy, and I want all of you to be happy." You can honor John's memory by following his formula for a happy life - living and loving with an open hand and an open heart.

He who was seated on the throne said, " I am making everything new!" Then he said, "Write this down, for these words are trustworthy and true." Revelation 21:5 After 81 years of life on this earth, our brother, uncle, cousin and friend is rejoicing... View Obituary & Service Information

The family of John Charles Morrison created this Life Tributes page to make it easy to share your memories.

He who was seated on the throne said, &quot; I am making everything...

Send flowers to the Morrison family.