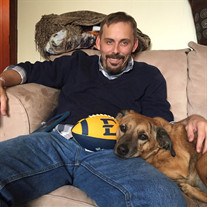 John David Meredith, 37, of Elizabethton and Jonesborough, passed away on Saturday, August 31, 2019 in the Vanderbilt University Medical Center, Nashville, TN. John is survived by a loving wife, Angie; his parents, Rick and Rosemary Meredith; his dog Charlotte; his mother-in-law, Rita Gentry; special cousins Ed and Cyndi Dance, Joi Dance, and Robin Littleton; his grandfather Vernis Garland; numerous loving family members; and countless friends. He was preceded in death by his grandparents Nancy Stranberg Garland and Tony and Jean Meredith. John graduated from Elizabethton High School in 2000. He was a lifelong Buccaneer fan and obtained both his bachelor’s and master’s degrees from East Tennessee State University. Highly active in politics, John worked in Kentucky to get Rand Paul elected to the US Senate and traveled extensively while working for Ron Paul’s presidential campaign. When John loved something he loved it fully and without any hesitation - music, books, history, baseball, the Bucs, golf, friends, family - he was all in. John was smart, funny, and kind. His smile took over his entire face and lit up every room. John was authentic in a way that most people can’t seem to be; he was always himself. He will be dearly missed. The family will receive friends at Hathaway Percy Funeral Home in Elizabethton on Saturday, September 7 from 5 p.m. until 7 p.m., with a memorial service officiated by Pastor Ron Owens and Pastor Garry Edwards at 7 p.m. Family and friends will meet at Hathaway Percy at 12:45 p.m. on Sunday, September 8 and travel in procession to Pleasant Grove Baptist Church Cemetery in Mountain City for a graveside service. Pallbearers will be Mike Ross, Kip Woods, Scotty Greene, Shaun Bowen, Jim Miller, Glen Woodfin, John Thompson, and Joe Valentine. Honorary pallbearers are Justin Stanton, Robert Kitchens, Wayne Murray, Jr., Eric Thomas, and David Jennings. John was diagnosed with ALK positive lung cancer at the end of 2018. Lung cancer doesn’t just strike elderly people with a 30-year smoking history. ALK positive is often diagnosed in young people, most of whom are never-smokers or light-smokers. Because of the stigma attached to lung cancer, it doesn’t receive nearly enough research funding. To make a donation in John’s memory, please visit https://lungevity.donordrive.com/index.cfm?fuseaction=donate.event&eventID=830 John’s sweet Charlotte rescued him when he visited the Washington County Animal Shelter six years ago. To help more pets find their people, make a donation in John’s honor at https://wcjcanimalshelter.org/donations/general-donation-form/

The family of John David Meredith created this Life Tributes page to make it easy to share your memories.

Send flowers to the Meredith family.