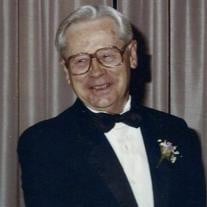 Mr. Joe Charles Manning, age 92, of Elizabethton, passed away Friday, January 18, 2013 at Ivy Hall Nursing Home following a brief illness. A native of Carter County, he was a son of the late Grover Cleveland and Nora Webb Manning. In addition to his parents, he was preceded in death by his wife of fifty-nine years, Evelyn Myers Manning; five brothers, Jim Manning, Glen Manning, John Manning, Roy Manning and Floyd Manning and two sisters, Lillian Gilley and Delores Manning. Survivors include a son, Conley Manning, Bluff City, TN and a son, David Manning and wife Lisa, Nashville, TN and two granddaughters, Emily Manning, Atlanta, GA and Meredith Manning, Oxford, OH. Mr. Manning was a U.S. Army veteran of World War II, serving in both the Atlantic and Pacific theatres. He became a part of the Normandy Invasion on day three. He landed on Utah Beach and served as an Army Seabee in assaults in France, Belgium and Germany. He was then assigned to serve in the Pacific Theatre and in Japan during the occupation. Mr. Manning returned to Carter County and lived the rest of his life in Elizabethton. He was a founder of the Carter County Rescue Squad. He, his friends and brothers provided the manpower needed to start the Rescue Squad. He and his best friend, Cale Hathaway, started the Four Way Service Station in the early 1950’s providing complete automotive services. Soon thereafter they started the Carter County Fire Services Dispatch, providing fire protection for subscribers in rural Carter County. He worked in the instrument department of Bemberg Corporation until the closing of the plant. He then worked at Powell Construction in Johnson City until his retirement. Funeral service for Mr. Joe Charles Manning will be conducted at 12:00 P.M. Noon Saturday, January 26, 2013 in the Sunset Chapel of Hathaway-Percy Funeral and Cremation Services with Rev. Dwight Basham officiating. The family will receive friends at the funeral home from 10:00 A.M. until 12:00 P.M. Noon on Saturday prior to the funeral service. Interment will follow the funeral service in Happy Valley Memorial Park. Military honors will be accorded by the Carter County Honor Guard. Memorials in lieu of flowers may be sent to the Carter County Rescue Squad, P. O. Box 682, Elizabethton, TN 37644.

The family of Joe Charles Manning created this Life Tributes page to make it easy to share your memories.

Send flowers to the Manning family.