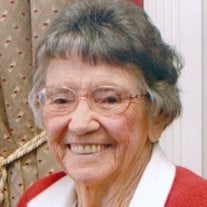 Joda A. Vance Souder, at the age of 99 years, four months, and seven days, joined her husband of 65 years, Pastor Charles Souder, in her new home “where the soul never dies: Beulah Land” to dwell in the house of the Lord forever. In addition to her husband, she was preceded in death by her parents, Eddie and Mahalia (Haley) Grindstaff Vance of Minneapolis, NC in Avery County; and siblings, Lucille Younce, Pauline Cook, Opal Vance, Ruby Schneider, Lawrence Vance, Mary Belle Vance, Reta Ellis, Pat Vance, and Winnie Greenwell. Mrs. Souder is survived by her daughter, Jeanette Hitchcock and her husband, Bill, and their son, Bill Hitchcock, Jr., and his sons, Jacob and Joshua Hitchcock; her son, Paul Souder and his daughter, Sherri Bohling and husband, Steve, and their sons, Taylor and Thomas Bohling, of Maryland, his daughter, Shay Hicks and her husband, Johnny, and their son, Mason Hicks, Elizabethton, and his son, Joey Souder, Milligan, and their mother, Barbara Thomas Souder, Johnson City. Mrs. Souder was one of the first inspectors of the Bemberg plant where she worked for several years, and also worked along side her husband as co-operator of Colonial Memorial Service. She had been an active member of the Julius Dugger DAR as well as the Adult Day Care Service where she was honored by the United Way as spokesperson and billboard model. Joda had also worked with Miss Gertrude Hale establishing vacation bible schools in local Baptist churches and had taught first aid to many in her Black Bottom neighborhood. The family would like to express heartfelt appreciation to the hospitalists and staff of Sycamore Shoals Hospital, Angie Bradnan, Executive Director, Life Care Center of Elizabethton, together with each and every employee, both present and former, for their excellent love and care and special friends, Betty Hudson, Nettie Cornett, and Mae Vance, sister-in-law. The graveside service for Mrs. Souder will be conducted at 1:30 P.M. on Tuesday, April 16, 2013 in the Happy Valley Memorial Park with Jerry Lyons, Minister, officiating. Those wishing to attend the graveside are asked to meet at the cemetery at 1:20 P.M. on Tuesday. Active pallbearers will be grandsons, Billy Hitchcock, Jr., Joey Souder, and Johnny Hicks, and great-grandsons, Jacob Hitchcock, Josh Hitchcock, and Taylor Bohling. Honorary pallbearers are great-grandsons, Thomas Bohling and Mason Hicks, and deacons and church members of Harmony Baptist Church. In lieu of flowers, donations may be made to Calvary Baptist Church, which was the mother-church of Charles and Joda Souder, at 225 N. Holly Lane, Elizabethton, TN 37643, or to the Carter County Rescue Squad, P.O. Box 776, Elizabethton, TN 37643.

Joda A. Vance Souder, at the age of 99 years, four months, and seven days, joined her husband of 65 years, Pastor Charles Souder, in her new home “where the soul never dies: Beulah Land” to dwell in the house of the Lord forever. In addition... View Obituary & Service Information

The family of Joda Vance Souder created this Life Tributes page to make it easy to share your memories.

Send flowers to the Souder family.