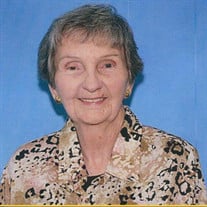 JoAnn Wheeler Flemister of Elizabethton, TN passed away Tuesday, March 3, 2020 quietly in her sleep. She lived her life just as quietly but with great impact to all those around her. JoAnn Flemister was born in Johnson City, TN April 12, 1935 and was raised in Elizabethton, TN where she graduated from Elizabethton High School and was a homecoming queen in 1954. After graduation she went on to Nashville where she earned her Registered Nursing (RN) degree. She spent the next 40+ years dedicating herself to nursing in several states (TN, NC, SC and FL) and overseas in Saudi Arabia. She poured her heart and soul into helping others from her professional career as a nurse well into retirement with volunteer work for the church and knitting baby caps for the neonatal unit at the hospital. She was also an excellent piano player. She carried her calm demure for life into raising her children with never a harsh word, but a steady and enlightening litany of support. She was married to John Karl Flemister for 22 wonderful years before his passing in 1978. JoAnn is survived by her daughters, Elizabeth Fair and Barbara Sanders; her grandchildren, Hunter Fair, Chase Fair, Miranda Sanders, Logan Sanders and her great-grandchildren, Mason and Alaina Fair. A graveside service to honor the life of JoAnn Wheeler Flemister will be conducted at 2:00 P.M. Thursday, March 5, 2020 in Happy Valley Memorial Park with Mr. Michael Koruschak, minister officiating. Active pallbearers will be selected from family and friends. Those wishing to attend the graveside service are asked to meet at Hathaway-Percy Funeral and Cremation Services at 1:15 P.M. on Thursday to go in procession to the cemetery. In lieu of flowers please make donations to Memorial and Honor Program, St. Jude Children’s Research Hospital, 501 St. Jude Place, Memphis, TN 38105-1942 or to the charity of their choice.

JoAnn Wheeler Flemister of Elizabethton, TN passed away Tuesday, March 3, 2020 quietly in her sleep. She lived her life just as quietly but with great impact to all those around her. JoAnn Flemister was born in Johnson City, TN April 12, 1935... View Obituary & Service Information

The family of JoAnn Wheeler Flemister created this Life Tributes page to make it easy to share your memories.

Send flowers to the Flemister family.