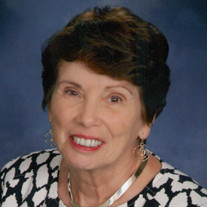 Jo Ann Forbes Blankenship, 79, of Johnson City, passed away peacefully on May 4, 2019 at the Johnson City Medical Center. Jo Ann was born in Carter County on December 18, 1939 to the late William Milburn and Florence Anna Forbes. In addition to her parents, she was preceded in death by her husband of 35 years, George W. “Pete” Blankenship; and two brothers, William “Bill” Forbes and Jack M. Forbes. Jo Ann was a 1957 graduate of Elizabethton High School. She graduated from Baptist School of Nursing in Memphis (1960) where she received her RN. Jo Ann was a graduate of East Tennessee State University where she received both her Bachelor of Science in Nursing (1984) and Master of Education (1987) degrees. She was a member of Phi Delta Kappa Honor Society. Jo Ann was a loving mother, grandmother, sister, and diligent community servant. Jo Ann attended Watauga United Methodist Church. She retired as a registered nurse after 39 years of service with 38 of those years being at the Veteran’s Administration Medical Center at Mountain Home. She spent most of those years working in the Operating Room Department. In the OR she first worked as a staff nurse, was promoted to head nurse and then led the department as the OR nursing supervisor. She was a member of the State of Franklin Association of Operating Room Nurses, American Nursing Association, Tennessee Nurses Association, and the Tri-Cities Association of Operation Room Nurse (Past President and board of directors). Upon her retirement, Jo Ann served Carter County for 16 years as a Commissioner representing the Fifth District. She also served the community by being on the boards of and volunteering with numerous organizations including the West Carter County Volunteer Fire Department, the Jane and Charlie Bayless Scholarship Fund, and Sycamore Shoals Hospital. In retirement, Jo Ann became a talented artisan working with many different materials to create beautiful jewelry. She loved the time that she spent at jewelry school with her sister. She was a great fan of UT football and basketball. Jo Ann’s most beloved activity was spending time with her grandchildren and other family members. Those left to cherish her loving memory include: son, George W. Blankenship, Jr. and wife Jennifer (Elizabethton); grandson, Jacob Blankenship (Elizabethton); granddaughter, Natalie Blankenship (Elizabethton); brothers, Roy Forbes and Erma Stevens (Elizabethton); brother, E. Wesley Forbes and wife Linda (Elizabethton) and Duane Forbes and wife Loretta (Elizabethton); sister, Edith Delp and husband Ray (Panama City Beach, FL); sisters-in-law, Mary Forbes (Elizabethton), Dorothy Forbes (Elizabethton), Nancy Gale Broyles and husband Charles “Chuck” (Johnson City) and Marie Blankenship (Elizabethton); and several nieces and nephews. A service to honor and celebrate the life of Jo Ann Forbes Blankenship will be conducted at 7:00 PM on Tuesday, May 7, 2019 in the Sunset Chapel of Hathaway Percy Funeral Home and Cremation Services with Reverend Leann Crandall and Reverend Mike Berry, officiating. The family will receive friends from 5:00 PM until 7:00 PM in the funeral home chapel, prior to the service on Tuesday. The graveside service will be conducted at 11:00 AM on Wednesday, May 8, 2019 at Happy Valley Memorial Park. Active pallbearers will be Craig Shubert, Michael Harris, Chuck Broyles, Wesley Forbes, and Jacob Blankenship. Honorary pallbearers will be the Elizabethton High School Class of 1957. Those wishing to attend the graveside service are asked to meet at Happy Valley Memorial Park at 10:50 AM on Wednesday. Those who prefer memorials in lieu of flowers are asked to send donations to: West Carter County Volunteer Fire Department, 1420 Milligan Highway, Johnson City, TN 37601 or to the charity of your choice. On line condolences may be sent to the family and viewed by visiting our website at www.hathawaypercy.com. Hathaway-Percy Funeral and Cremation Services is serving the Blankenship family. Office: (423) 543-5544.

Jo Ann Forbes Blankenship, 79, of Johnson City, passed away peacefully on May 4, 2019 at the Johnson City Medical Center. Jo Ann was born in Carter County on December 18, 1939 to the late William Milburn and Florence Anna Forbes. In addition... View Obituary & Service Information

The family of Jo Ann Forbes Blankenship created this Life Tributes page to make it easy to share your memories.

Send flowers to the Blankenship family.