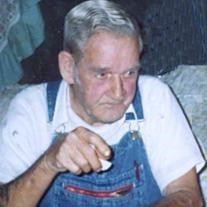 Jaydebee (J.B.) Highsmith, 85, 117 Highsmith Lane (Tiger Creek Road), Roan Mountain, passed away Tuesday, October 16, 2012 at his residence following an extended illness. A native of Macon, GA he was the son of the late Jeb and Esslie Highsmith. He was a saw mill mechanic. Mr. Highsmith served his country in the U.S. Army during the Korean Conflict. In addition to his parents, he was preceded in death by his wife, Peggy Highsmith; four brothers, Clarence, Robert, Tommy and Johnny Highsmith and a sister, Pearl Bell, all of Georgia. Survivors include his children, Rev. Bill and Rachel Highsmith, Rev. Matthew and Gloria Guy, Richard Highsmith and Frank Highsmith, all of Tiger Creek; grandchildren, Brandy Highsmith, Billee “Billee Boy” (as he was fondly called by Gran Pap) Highsmith, Bradley Guy, Christopher Highsmith and Jeffery Highsmith; great-grandchildren, Logan Whitehead, Alexis “Katie Jay” Matheson, Trinity Matheson, Mason Matheson and Caleb Guy. A special nephew, Abray Bell, Ball Ground, GA also survives. Funeral service for Jaydebee (J.B.) Highsmith will be conducted at 7:00 P.M. Saturday, October 20, 2012 in the Sunset Chapel of Hathaway-Percy Funeral and Cremation Services with Rev. John Vance, Rev. Bill Morgan and Rev. Bob Campbell officiating. Music will be under the direction of the Vance Family. The family will receive friends at the funeral home from 5:00 – 7:00 P.M. on Saturday prior to the funeral service or at the residence, 117 Highsmith Lane, Roan Mountain at other times. Graveside service and interment will be conducted at 2:00 P.M. Sunday, October 21, 2012 in Captain Nelson Cemetery. Military honors will be accorded by the American Legion Post #49. Active pallbearers will be Jason Matheson, Billee Highsmith, George Baker, Rob Chambers, Andy McGuire, Jackie Triplett and Leon Guy. Honorary pallbearers will be Ray Davis, Matthew Guy, Buster Barnett, Bill Chambers, Ron Brooks and Kenny Harrison. Everyone will meet at the cemetery at 1:50 P.M. on Sunday for the graveside service. The family would like to express a special thank you to Kenny Harrison and the nurses of Amedysis Hospice for their care to Mr. Highsmith.

The family of Jaydebee (J. B.) Highsmith created this Life Tributes page to make it easy to share your memories.

Send flowers to the Highsmith family.