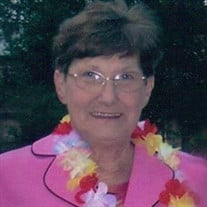 “I have fought a good fight, I have finished my course, I have kept the faith.” 2 Timothy 4:7 Jane D. Colbaugh, age 77, of Elizabethton, TN passed away February 6, 2018 at Ivy Hall Nursing Home following an extended illness. She was a native of Sullivan County, TN and the daughter of the late Bertha Dempsey. Mrs. Colbaugh was a member of Buffalo Valley Christian Church, Johnson City and had worked at Ridgewood Restaurant for more than thirty-nine years where she enjoyed interacting with her customers and her coworkers. In addition to her mother, she was preceded in death by three brothers, Taylor Moore of Nebraska; Clarence Moore of Elizabethton; Gene Dempsey of Johnson City and two sisters, Helen Proffitt of Bluff City and Pearl Waldrop of Bluff City. Survivors include her husband of forty-six years, Roy Colbaugh of the home; four daughters, Teresa Free and husband Danny of Kingsport; Tammy Taylor and husband Bill of Elizabethton; Renee Verran and husband Ron of Watauga; Rachel Jennings and husband Andy of Johnson City; two sons, Rocky Bridgeman and wife Brenda of Hampton and Terry Bridgeman of Elizabethton; one sister, Georgia Tipton and husband Johnny of Johnson City and one brother, Carl Moore and wife Vada of Elizabethton. Jane was blessed to be called Granny by several grandchildren and great-grandchildren. Several nieces and nephews also survive. The funeral service for Mrs. Colbaugh will be held in the Sunset Chapel of Hathaway-Percy Funeral and Cremation Services on Friday, February 9, 2018 at 7:00 P.M. with the Reverend Nathan Jennings officiating. Music will be under the direction of Mrs. Billie Fox and Mr. David Arney. The family will receive friends at the funeral home from 5:00 – 7:00 P.M. on Friday prior to the funeral service. Family and friends are welcome to visit the family at the home of Tammy Taylor, 1719 West G Street, Elizabethton. The graveside service and interment will be held on Saturday, February 10, 2018 at 10:00 A.M. in the Colbaugh Cemetery. Those attending are welcome to meet the family at the funeral home at 9:15 A.M. to go in procession to the cemetery. Active pallbearers will be Tyler Colbaugh, Dalton Verran, Garrett Jennings, Terry Bridgeman Jr., Rocky Bridgeman Jr., Mark Bridgeman and Joshua Sams. Honorary pallbearers will be Danny Free, Bill Taylor, Ron Verran, Andy Jennings, great-grandsons and other family and friends. The family would like to extend a heartfelt thank you and appreciation to Ivy Hall Nursing Home and all its staff for the caring of our mother during her time of need and residency at Ivy Hall Nursing Home. Those who prefer memorials in lieu of flowers may make donations to the Buffalo Valley Christian Church, 111 Buffalo Valley Church Road, Johnson City, TN 37601 or to the Elizabethton/Carter County Animal Shelter, 135 Sycamore Shoals Drive, Elizabethton, TN 37643.

The family of Jane Colbaugh created this Life Tributes page to make it easy to share your memories.

“I have fought a good fight, I have finished my course, I have...

Send flowers to the Colbaugh family.