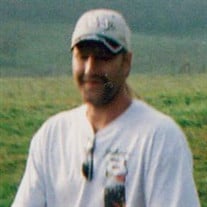 Mr. James Roscoe Russell, age 46, of Elizabethton, TN passed away Monday, January 25, 2016 at Sycamore Shoals Hospital. A native of Carter County, he was the son of Opal Miller Russell, Hampton, TN and the late Paul William Russell. Mr. Russell was employed as a butcher at Potter’s Meat in Watauga. He enjoyed fishing, camping and working on old cars. In addition to his father, he was preceded in death by a half-brother, Jeffrey Allen Rupard. Those left to cherish his memory in addition to his mother, Opal Miller Russell include a daughter, Brittany Russell and her fiance’ Michael Carpenter and a son, John Paul Russell, all of Elizabethton; a brother, Rickey Wayne Russell, Elizabethton and a sister, Paula Russell, of Florida. Several aunts, uncles and cousins also survive. A graveside service to honor the life of Mr. James Roscoe Russell will be conducted at 2:00 P.M. Saturday, January 30, 2016 in the Captain Nelson Cemetery. Active pallbearers will be selected from family and friends. Those wishing to attend the graveside service are asked to meet at Hathaway-Percy Funeral and Cremation Services at 1:00 P.M. on Saturday to go in procession to the cemetery. Those who prefer memorials in lieu of flowers may make donations to the American Cancer Society, c/o Lou Cooter, 415 Washington Avenue, Elizabethton, TN 37643.

The family of James Roscoe Russell created this Life Tributes page to make it easy to share your memories.